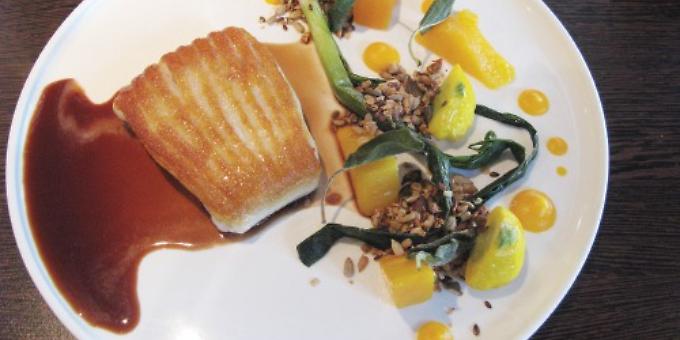 ON a beautifully sunny afternoon, it was my privilege to frequent our local riverside gem — Shaun Dickens at the Boathouse.

Myself and friend were made to feel exceedingly welcome by all of the staff, particularly our supremely knowledgeable front of house manager. Warm home-made bread with our recommended wines simply melted in the mouth.

The wine choice was difficult from such an amazing selection, but a fruity little number from Provence was utterly delectable and far too easy to drink! Commencing with the Celeriac, and my friend with the Burrata, the flavours and presentation were sublime.

Attention to detail and textures clearly show the reason why this restaurant has just been awarded three rosettes by the AA, as a well-deserved mark of excellence.

As the sun shone across the beautifully furnished terrace and on to our immaculate table, the Cornish Skate arrived along with the Artichoke Barigoule.

With red wine jus caressing the succulent skate, the flavours merged in a fabulous unity.

The small details such as the seed granola provide the perfect balance of textures in this fantastic dish.

The Artichoke Barigoule was served with carrot, fennel and barley — all brought together with a glorious goat curd.

Everything on the plate at Shaun Dickens serves a genuine purpose, and the creativity involved in their conception is to be commended.

For dessert we opted for a banana cheesecake — a healthy option as one of my five a day! This was creamy with the perfect texture and a touch of lime to cut through the sweetness.

My friend opted for the chocolate option with fig, streusel and hazelnut — the latter a good protein source, I’m sure you’ll agree!

During the consumption of this dessert, I lost her to a world of “pure delectation” and was forced to resume our conversation only when she had finished every morsel!

The location by the river — with the fantastic and fresh outside area or perfect views from the stunning interior — is the perfect place for a catch-up with friends or a more formal corporate affair.

There are also great options available for groups of eight or more, including a restaurant takeover for larger groups.

We shall certainly be back to watch the sun set in this very special restaurant in the near future. A perfect time of year for enjoying and celebrating as the cooler evenings beckon.

With the festive season fast approaching, Shaun has created a special festive menu for groups enjoying a Christmas get-together from as little as £29.95 for a three-course dinner. What a present for those in the know! (Just keep it between us...)

Shaun is an award-winning chef who has trained at some of the finest restaurants in the world, working closely with chefs of international repute including Raymond Blanc, Thomas Keller and Alan Murchison.

Starting his career at the two Michelin-starred Le Manoir aux Quat’Saisons before travelling across the Atlantic to New York to work at Thomas Keller’s iconic Per Se, a three Michelin-starred restaurant, Shaun has gained experience under the tutelage of the world’s finest culinary elite.

Returning to England in 2009, Shaun joined Michelin-starred L’Ortolan in Shinfield before seizing the opportunity to unite kitchen and garden at the beautiful Fallowfields Restaurant, working as both head chef and farm manager.

Shaun Dickens at the Boathouse is Shaun’s first restaurant — it showcases the skills and passion he has developed in the charming, stylish and elegant setting of Henley.

The restaurant offers modern British cuisine alongside the stunning vista of the River Thames and was recently awarded three rosettes by the AA.

The AA inspector said: “The Boathouse doesn’t just overlook the river from its attractive decked patio, it makes the thoroughgoing most of the location with Thames buffet cruises too. If you’re up for a weekend breakfast as well, there may be no reason to tear yourself away all day.

“The place is run with a light touch by experienced, friendly staff, and the kitchen deals in smartly engineered modern food that reinterprets the classics, as well as adding some new ideas of Mr Dickens’s own and desserts are as ingenious as everything that precedes them.”

Sue Ryder warns it could fold without help from Government