Devoted duo have got what it tastes to shine 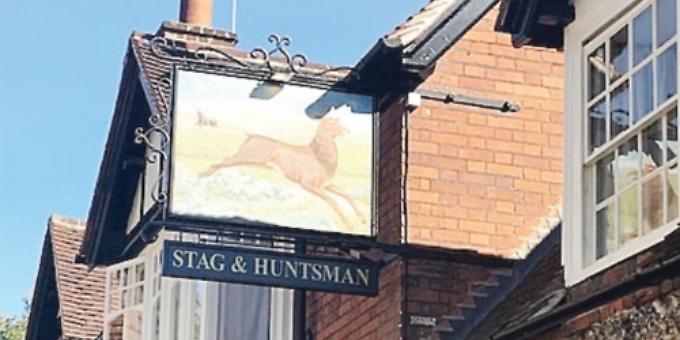 WE all know that Henley is positively surrounded by beautiful Chilterns countryside and quaint pubs and that’s no secret, writes Amanda Stewart.

However, sat between Henley and Marlow is of course the totally enchanting village of Hambleden — a must-use on any film location scout’s list if the amount of blockbuster films and prime-time TV shot in the area are to go by (Midsomer Murders, anyone?).

Come January, the Stag & Huntsman is set to feature in Channel Four’s hit reality show Four in a Bed. Tune in to see how landlords Marius, 35, and Sarah, 33, get on.

The pair had just come from an interview with Marlow FM when they joined me for lunch.

The Stag & Huntsman couldn’t have looked any better bathed in sunshine and nestling quietly between the valleys on a cloudless day.

Both originally from South Africa, Marius and Sarah have some really refreshing ideas and their limitless energy seems to know no bounds.

This effervescent duo are clearly passionate about injecting a new lease of life into the Stag & Huntsman and have already made an impact with their recent beer festival where they offered 17 different ales both local and from further afield (they are a free house) and a fun Mexican evening. The aroma of their tantalising food certainly caught the attention of the locals.

The comprehensive menu has dishes to tempt all tastes, from land to sea, with all ingredients fresh and invariably locally produced and carefully chosen. They don’t pretend to be gastropub, but actually I have rarely enjoyed such tastes as offered to me.

To make the most of the surprisingly sunny September lunchtime, we chose to dine outside in the spacious, picturesque and comfortable garden. It felt good to be there.

Pressed Belly of Pork was my first course, served with torched fig and a Marsala sauce. This was quite simply divine. The pork belly is braised in cider and that’s just the start of the process of producing this taste-tangling-tempter.

To follow I had their most popular signature dish and I am counting the days until I can return to have this again! Creamed Crayfish and Clam Tagliatelle — simply wow!

Not only was this beautifully served, it was one of the tastiest dishes I have been privileged to enjoy. If you like plenty of flavour, this is the must-have! I was so impressed that I asked Marius how he made this and he was actually happy to share his knowledge — but if you want to learn his secrets, you simply must visit.

The puddings — should one have room — were also outstanding. From the Madagascan Vanilla Crème Brûlée served with raspberries and lemon shortcake to the enormous (two could share this) Chocolate Brownie Sundae and the Eton Mess (again two could share.)

All in all, although Marius and Sarah do not pretend to have Michelin status, I have rarely eaten such well-thought-out and flavoursome food in such pleasant surroundings, never quite knowing whether a celeb from a film set might be sat on the next table or simply wander in.

The pub is totally dog-friendly — four-month-old resident spaniel Griffin is positively cuddly and can already produce a trick or two! Importantly, there’s plenty of parking — which is absolutely ideal for those wanting a dog walk followed by a non-expensive but high level of lunch or dinner.

Notably, they don’t shut like so many do during the day on a Saturday or Sunday, so late lunch or Sunday dinner is not restricted by clock-watching.

They do have rooms (all refurbished) and if you fancy a party or wedding they can cater for that too. In fact, I don’t imagine there’s much these two cannot do.

Back at the office, I quickly spoke to Alex Dick, estate manager of the Culden Faw Estate, and he was extremely happy to voice his support.

He said: “Over the years, the Stag and Huntsman has tried various different styles. I believe that we have now found in Marius and Sarah the right couple.”

Alex, I agree with you, and it won’t be too long until I return.

For more information, call the Stag and Huntsman on (01491) 571227 or visit www.thestagandhuntsman.
co.uk

A woodland feast to savour

IF you are looking for escapism from the everyday, along with rustic charm and exceptional food ... [more]