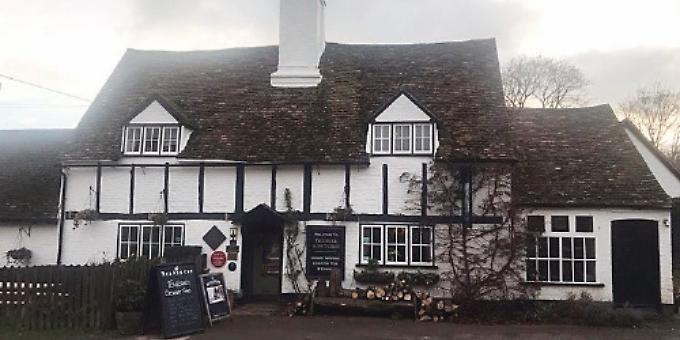 I’VE always considered Turville to be a place with a certain amount of magic and mystery and that was before I discovered the story of Ellen Sadler, who allegedly fell asleep in 1871 aged 11 and purportedly did not wake up for nine years, thus becoming known as the “Sleeping Girl of Turville”.

However, as I discovered, Turville holds many secrets and one of them surely has to be The Bull & Butcher.

James Orford became landlord and chef to this quintessential English hostelry in 2014 and has earned himself a reputation as a seriously good pie-maker, so I took local resident Karen French along with me to find out just how good their food is.

Now Turville is, as all of us probably know, somewhat of a magnet for film and television crews and we also know that is of little surprise given the charming setting and of course not forgetting the magnificent walks that surround this breathtaking Chitty Chitty Bang Bang and Vicar of Dibley location.

Am I gaining your interest yet? I hope so. So let me tell you about the food. We both chose the soup of the day to start. I had the spicy parsnip variety and my guest the ham hock and lentil.

My first observation was that these were beautifully presented and, after sampling, became worthy of serious mention. The ham hock variety was virtually a meal in itself and my spicy parsnip soup was thick and creamy and quite honestly the most tasty bowl of soup I think I’ve ever had. After entirely finishing this dish, I found myself regarding the Bull & Butcher with very fresh eyes! As I mentioned before, this relaxed dog-friendly environment serves a variety of pies. They make them from scratch on the premises and as you walk in you cannot miss the large chalk board showing just how many of these pies they’ve sold on the day.

It kind of adds to the informal setting, and as James explained: “If I’ve got it, I’ll make it for you!”

So we had to have a pie! Karen chose the chicken and mushroom with fat chips, mixed veg and gravy. I chose from the non-pie menu, tandoori chicken salad with yoghurt mint dressing, which was totally healthy until I noticed the fat chips too!

I’m sure you don’t need to have the fat chips but if you do, beware, you will eat them as they’re impossibly tasty.

So as we sat enjoying our generously portioned food, Karen told me she had married in the Turville church and later, chatting to James, he explained that the Bull & Butcher is known for its romance as just recently he had been visited by two couples who had met in the Bull & Butcher 25 and 30 years ago and had returned to celebrate.

Back to the food. The Bull & Butcher was by now buzzing and fairly full but James, a former hospitality lecturer, has been astute enough to surround himself with a good team who were friendly and efficient. The whole atmosphere was relaxed, nothing seemed to be too much trouble — and the prices were good.

James assures me his food is locally sourced. And as I cast my eyes around, the pies did seem to be extremely popular and there were many differing mouth-watering varieties served with any variety of side orders including the standard mash.

I thought we’d be too full for dessert, but no. Sticky toffee pudding and ice cream and black cherry cheesecake were our puddings of choice, although we really did struggle to find room for these as we had totally demolished our main courses, being as they were so fresh and superbly tasty. Despite us thinking that we would not be able to eat our desserts, they again were so full of flavour that we found ourselves surreptitiously loosening our waist bands instead.

I really liked everything about the Bull & Butcher. So much so that I wish I lived closer as I would certainly take part in their Wednesday steak night, or their Thursday curry night, Friday fish and chip night and I most certainly would support them with their post-Christmas charity walk being held tomorrow (Saturday) at 10am.

They are avid supporters of Stokenchurch Dog Rescue and are holding a five kilometre walk with sausage rolls (with vegetarian option) to help raise funds for this worthy cause as January is the Stokenchuch Dog Rescue’s most difficult month for vets’ bills.

And if you call in there for lunch after, you’ll have had time to decide as to whether to have a shortcrust or puff-pastry pie as well as having made room for it. Enjoy! I know I did!