Cherry Tree’s one to keep ‘trac’ of 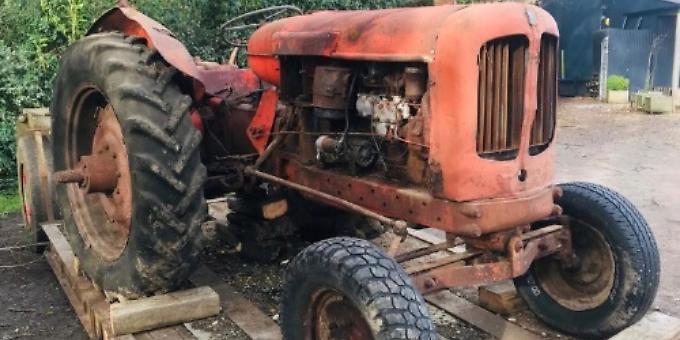 I WAS so delighted to be able to rejoin Dan Redfern, basset hound Crunch and Dan’s trusted team back at the Cherry Tree in Stoke Row with my dinner guest, the well-known Henley vet Erik D’Arcy-Donnelly, who was freshly returned from Crufts (Erik is the chosen Crufts vet).

We’d all met before on one of Dan’s now famous dog walks and I’d spent a fabulously fun but slightly hazy New Year’s Eve at the Cherry Tree.

As Erik and I read the ever-changing daily menu, Dan chatted animatedly about his new purchase for the pub’s garden — a tractor!

“I wanted a Nuffield,” he said, “and as we are so close to Nuffield Place, the home of the great engineer William Morris, creator of the Nuffield tractor, I found one and I bought it! It will take between six months to a year to convert to be child-safe, so that children can enjoy it as a play apparatus.”

Erik and I then resumed our menu reading and chose our food.

As our choices arrived, Dan continued to explain his plans for the pub as I enjoyed the roast wild mushrooms with a seriously good array of flavours (I think the best flavours I’ve had for a long time).

Erik, had chosen the pork and sage scotch egg with piccalilli, which was served to the usual high standard I’ve grown accustomed to at the Cherry Tree.

“We have the vegetable garden taking shape and are hoping planting will start in the next few weeks,” Dan told us.

“We’ve used 90 per cent reclaimed materials, including turning old picnic benches from closed Brakspear pubs into raised beds. It’s so satisfying to use materials that had become redundant and now turn them into something useful.”

We were happy to let Dan chat as we were busy enjoying the total delights on our plates!

“We will have chickens, a tree house, a herb garden and lots of vegetables, for the pub kitchen of course.”

By now we had also been joined by Crunch, who sat still with such perfection — not too close yet not too far away. He was definitely hinting that he might like any leftovers.

Sadly for Crunch there were none and, getting bored, he eventually wandered off. Poor Crunch.

Our main courses had by now appeared, served by the aforementioned trusty team, and Erik gazed at his 10oz ribeye steak served with mouth-watering garlic butter and triple cooked chips with glee. I had chosen the pan-fried sea bass fillet.

This was AMAZING. If I wasn’t super-impressed by the presentation — which I was — the flavours! Oh my goodness! They were just the best! Saffron fondant, crab croquette, roast fennel and hot gazpacho sauce! No wonder with food like this, the car park is nearly always full when I drive past.

Still rendered relatively speechless as we dined, Crunch rejoined us very politely once more and Dan continued chatting animatedly with his busy plans.

“In the next few weeks we are putting up a cleft chestnut post and rail fence, which will surround the vegetable garden and also run along the perimeter for the public garden, which for many years has been just open to the road. We look forward to placing the restored Nuffield tractor in front of the fence. Who knows, it may even be ready this year.”

By now, Erik and I had admitted to each other that we were almost too full for dessert, but if a job is to be done properly, we must soldier on regardless.

The menu surreptitiously appeared, as if by magic. We did at least order slightly lighter options — the lemon and cherry posset, lemon butter biscuits served with hazelnut shards was my choice, and Erik chose the vanilla and blueberry creme brûlée served delicately with shortbread biscuits.

I won’t deny we were both a bit shamefaced as we ate every bit. It was simply just too good to leave!

Suddenly it was late. A vet needs his sleep! The restaurant, however, was still busy and the bar was full of tinkling laughter.

As I left, I reminded myself that I’ve enjoyed a number of great nights in the Cherry Tree and it’s always a delight to catch up with Dan and his dedicated team and learn of his continued new plans for the venue.

Well done, Dan, your enthusiasm is infectious and boundless. Can’t wait until the next visit.