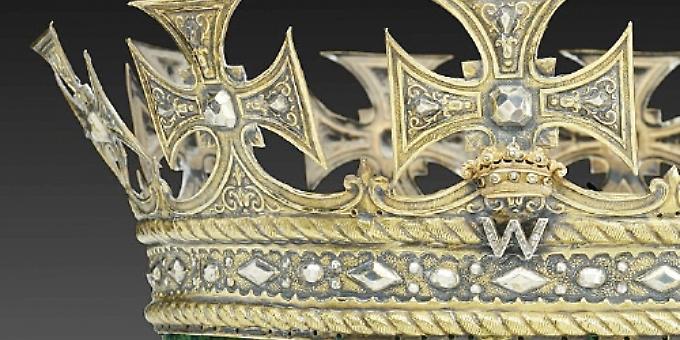 WHAT treasures are hiding in your attic?

“One of the joys of working for an auction house is the unexpected discoveries,” says Frances Noble, the head of the jewellery department at Dix Noonan Webb.

“Who would have thought that a dusty old coronet offered for sale with DNW would turn out to have been commissioned by the Duke of Wellington himself as a personal gift to a beautiful young singer?

“The coronet was black with dirt. On first impressions, it looked to be just gilt metal, a bit of a novelty, but nothing special.”

But as the story unfolded, the family offering the piece for auction believed that there was a connection with the Duke of Wellington, who may have given the coronet as a gift to a member of their family — a singer and musician, the Hon Lady Mary Ann Jervis.

“I love the chance to do research into family heirlooms,” adds Frances.

“We had the coronet cleaned and it turned out to be stunning — made of silver with silver gilt detail, initialled to the front with a diamond set ‘W’ beneath a ducal coronet — the monogram of the duke.

“A full hallmark confirmed the piece had been made in 1838 by Robert Garrard, a highly important silversmith.”

All the pieces of the puzzle were falling into place but the final discovery was to complete the story.

The coronet was lined with silk, carefully sewn inside. On close inspection to the reverse, and hidden behind this lining, was a barely visible inscription which read as follows:

“This crown was presented by Arthur, Duke of Wellington, to the Hon MA Jervis, designed by him and executed by Messrs Garrard, August 16th 1838.”

With more research to come at the Garrards archives, this little piece of an aristocratic’s family history will be complete!

The coronet will be included in Dix Noonan Webb’s forthcoming “Jewellery and Objects of Vertu” auction on Tuesday, March 27.