Enterprise expert honoured for services to the economy 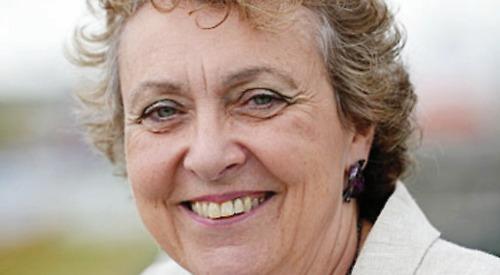 A WOMAN from Woodcote has been awarded an OBE for services to the economy of the South-East.

Kathy Smith, who has lived in the village for almost 30 years, is director of the Enterprise M3 local enterprise partnership, which was set up by the Government in 2012 to encourage business growth in Surrey and Hampshire.

It was one of several organisations that replaced the South-East England Economic Development Agency, of which Mrs Smith was communications director and area manager for Hampshire and the Isle of Wight.

The partnership is funded by the Department for Business, Innovation and Skills and works with businesses, local authorities and other public bodies to promote business opportunities. It has secured £200million in funding for infrastructure projects such as roads, housing and “skills centres” specialising in a range of areas including the roll-out of 5G, the next generation of mobile internet.

Mrs Smith lives in Beech Lane with her husband David and the couple have two grown-up children, Alexander and Thomas, who attended Langtree School in the village. In the Nineties she helped to conduct a series of village appraisals which formed part of Woodcote’s neighbourhood plan when it passed a referendum in 2014.

She grew up in Ascot and attended Windsor High School for Girls then sat a geography degree at the University of Sheffield. She graduated in 1977 and spent several years working in unemployment benefit centres, where she helped homeless people in difficult and complex circumstances to find work.

She became area manager for Oxfordshire and Berkshire in the Eighties, then went on to work in a number of public sector roles related to employment and skills training. Her current role was created about six months after SEEDA was dissolved. Mrs Smith, who is known professionally by her maiden name of Slack, said: “There was some uncertainty about how it would be funded but once that was resolved they needed someone to come in and take charge.

“I enjoy the diversity and the chance to meet new people. There’s a chance to learn something new every day and I always come across people who are achieving remarkable things.

“My job is to bring them together to bring about economic success, which is going to be so important in the year ahead.

“We’ve brought a lot of money into the area and we’re starting to see the impact of that.

“I was really shocked when I heard about the OBE and feel it must be celebrated as a joint effort as my team have made all the difference. I’m immensely proud.”