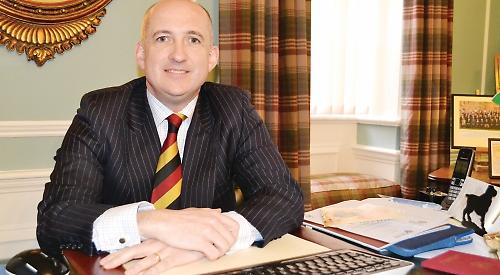 THE new headmaster of the Oratory School in Woodcote says he is excited by the challenges of the role.

Joseph Smith took over at the start of the academic year in September following the departure of Adrian Wyles in April after less than a year in post.

The 44-year-old, who had been head of the Oratory Prep School in Goring Heath since 2010, said it was the perfect opportunity as he wanted a more senior role but was reluctant to leave the area.

Mr Smith’s main aim will be to improve the academic performance of the independent Catholic boys’ school, which he says is mostly of a high standard but has some areas for improvement.

One of his targets will be GCSE results. Last year the pass rate for students achieving five or more A* to C grades, including English and maths, was 90 per cent, down one per cent on 2015.

However, there will also be a strong emphasis on measuring pupils’ progress, not just their final marks.

Mr Smith said: “We need to become the kind of school, and we aren’t far off it, where parents feel their sons will do at least as well as they would have done anywhere else and with all the additional benefits of an Oratory education.

“We don’t plan to change our core ethos but if we have to advise some boys that the Oratory isn’t right for them, I’m prepared to do that although I won’t enjoy it.

“We don’t want to become elitist or an academic hothouse but we do have to maintain standards.” Mr Smith admitted his appointment was “not a normal elevation” as he didn’t have to apply for the role or be interviewed but was invited by the governors to take over after Mr Wyles resigned.

The school won’t comment on the former head’s departure but it’s understood there was disagreement over its future direction.

Second master Tom Hennessy was acting head for the remainder of the last academic year.

Mr Wyles had replaced Clive Dytor, a former Royal Marine who was decorated for heroism in the Falklands War and was headmaster for 14 years.

Mr Smith said: “We had a very successful and highly regarded head in Mr Dytor and the appointment of his successor sadly didn’t work out, which wasn’t a desirable state of affairs but we had to deal with it.

“I think I was a ‘known quantity’ as the prep school is served by the same governing body and, of course, I knew this school pretty well as a result. It was a huge honour to be asked and I didn’t have to think very hard before I accepted. It’s quite a pressure because, following in Mr Dytor’s footsteps, you don’t want to be the one that drops the ball. However, pressure is a good thing when it’s channelled properly and I’m confident I can do well.”

Mr Smith grew up in Norfolk and studied English at the University of Liverpool then trained as a teacher in London. He married his wife Debbie in 1997 and the couple have three children, Seb, 15, an Oratory pupil, Imogen, 13, and Tom, 10, who attends Oratory Prep. He first taught English at the independent Colfe’s School in Greenwich, then moved to Monkton Combe School, near Bath, also an independent, where he taught for 12 years and was a housemaster for five.

He was attracted to the Oratory Prep as he wanted more responsibility and to work in a Catholic school as he was raised in the faith.

He succeeded Dave Sexon, a former Oxfordshire county councillor for Goring who still lives in the area.

Mr Smith said: “I was a bit surprised but very pleased to get the job as I felt ready for leadership and wanted my own ‘train set’. It just felt right from my first visit and I think they felt I was a good fit.

“I loved my time there and wanted to remain a part of the Oratory family, which is why this job is a real win-win for me.

“There’s a great atmosphere at this school and it’s very rewarding to see the boys interacting and to help them deal with the challenges of growing up, tough as that may sometimes be.

“I feel very optimistic about the future and am loving the opportunities that this role offers.”

The new head of the prep school is Rob Stewart, a married father-of-three who taught at Eton for 15 years and was a housemaster for four. He previously taught at Ampleforth College in north Yorkshire.

He said: “I was drawn to working at a Catholic school again because they offer a distinctive combination of good education and outstanding pastoral care.

“This school has an outstanding community of staff, pupils and parents who enjoy strong, supportive relationships with one another and are keen to see it go from strength to strength.

“I’ve really enjoyed my first term here and look forward to building on the school’s successes.”