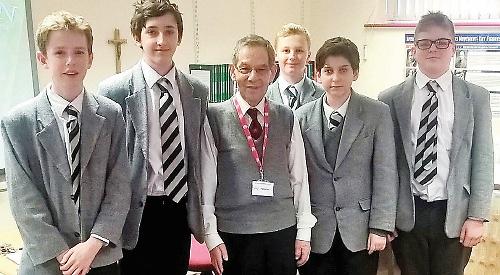 A HOLOCAUST survivor shared his experiences of life under Nazi rule with pupils at the Oratory School in Woodcote.

Rudi Oppenheimer, 86, and his siblings were liberated from the Bergen-Belsen concentration camp in northern Germany, where his parents perished, by Russian soldiers during the final months of the Second World War.

His family, who faced persecution because they were Jewish, had fled Berlin in the Thirties and settled in Amsterdam, where his father worked in a bank.

However, when Holland was invaded in 1940, they were relegated to a ghetto and ultimately sent to the camp. Mr Oppenheimer’s visit was arranged by the Holocaust Educational Trust, which aims to teach children about genocide under the Nazis.

Marcus Fec, the school’s head of history, said: “It was a privilege for us to welcome Mr Oppenheimer to our school and his testimony will remain a powerful reminder of the horrors that so many experienced.

“The boys listened with interest throughout the talk and asked thoughtful and probing questions in the half-hour session afterwards.

“We hope that it will encourage our students to learn from the lessons of the Holocaust and make a positive difference in their own lives.”