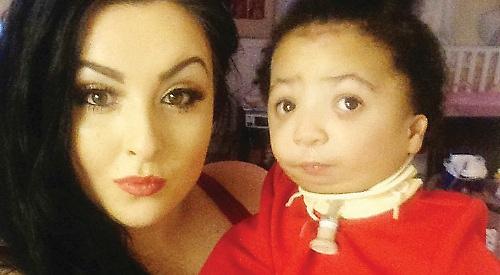 A GIRL who was given a 10 per cent chance of survival after being born nine weeks premature is defying doctors with her progress.

She also had an undersized jaw, a displaced heart, a cleft palate and jaundice.

Now, almost three years later, she has learned to eat, run and even speak a little.

And she reduced her mother Megan Rees to tears when she said “mummy” for the first time recently even though she has had a tracheostomy to help her breathe.

Ms Rees, 23, from Woodcote, said: “She makes little squeaks but because of her tracheostomy her vocal cords are blocked so she very rarely manages to speak by herself.

“When she said ‘mummy’ it was incredible to be able to hear my daughter’s voice for the first time.

“I burst into tears while she was shocked and laughed at being able to do it. She had defied all the odds again.”

When Ariella was born at the John Radcliffe Hospital in Oxford, doctors warned Miss Rees and her partner Renado Skeete that their baby was unlikely to see out 48 hours.

But the tiny girl had other ideas and she became gradually stronger over the next few months so that she was able to spend her first day at home on Christmas Day.

Since then she has continued to progress so that, with the exception of speech, she has almost caught up with other children of her age. She can already count to 10 and can identify colours.

The family moved to Oxford in 2015 to be closer to the hospital as Ariella still needed lots of treatment.

Miss Rees said: “The teams at the John Radcliffe are remarkable and my daughter wouldn’t be here without them.

“The respiratory nurse is now known as our ‘hospital mummy’ and any problems we have she sorts.”

In May last year Ariella had an operation to remove the nasogastric tube in her nose which fed her and replace it with a mini button in her stomach. She now has two meals a day and loves chocolate and prune purée.

Miss Rees said: “She was always pulling at the tube and would pull it out four or five times a day, giving herself nosebleeds. That’s what made us decide to have the operation. It was a little difficult at first but it was the best decision we’ve made and we haven’t looked back.”

Ariella also no longer needs ventilation during the day and her parents hope to wean her off it overnight as well during the summer. When she is five she will have jaw distraction surgery, which may allow doctors to repair the hole in her neck made during the tracheostomy.

This summer, Ariella will start at the nursery at Mabel Prichard School in Oxford for children with learning difficulties.

Miss Rees, a former pupil of Langtree School in Woodcote, said: “We want her to go. We are a bit worried about her picking up bugs but we have to let her catch them in order to get stronger.

“It was very difficult for us to make the decision on whether Ariella should go to a special needs or mainstream nursery.

“We decided on special needs but when she goes to school we want her to go to a mainstream one and have a life as normal as possible.” She said that despite all the hardships during her short life, Ariella was always in a good mood.

Miss Rees, whose own mother Michelle still lives in Woodcote, said: “She’s one of the most happy girls you’ll ever meet, never not smiling regardless of what life throws at her. It’s inspiring.

“She loves baking cakes with mummy and painting. She also loves bowling and her trampoline.

“She’s got a bit of a diva side and if she doesn’t get her own way we are in trouble but we like that. If she wasn’t determined we wouldn’t be where we are today. This child doesn’t let anything stop her, including her disabilities.

“Ariella is one strong, determined girl and I truly believe will get anywhere she wants to in life.”