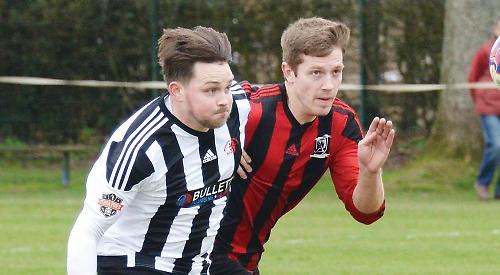 TEN matches without defeat proved one too many for Woodcote/Stoke Row as they failed to secure a place in the final of the Berkshire Trophy Centre Senior Cup final at Madejski Stadium as they went down 3-2 against Cookham Dean after extra time on Saturday.

Woodcote put in a below-par performance in this semi-final clash at the neutral venue of Mortimer FC.

As is often the case in semi-finals, it was not a classic match and also predictably, it was a bad-tempered, feisty affair. Within the first five minutes a player from each side had been shown a yellow card for rash tackles.

The first 45 minutes saw the sides battle toe-to-toe for midfield dominance, with little goalmouth action. Woodcote’s goalkeeper, Kane Roberts, did well on a couple of occasions, especially on 32 minutes when he got the merest fingertip to a ball which seemed certain to score, but which hit the post and bounced tantalisingly along the goal-line, enabling the keeper to scramble back and recover it. Cookham’s Nick Bovingdon also did well on a couple of occasions, saving from Jake Dillon and James Worsfold.

The second-half saw the continuance of the first-half war of attrition, but the deadlock was broken on the hour mark. Jake Dillon rose above everyone in the Cookham area to score with a bullet header from his brother Frank’s corner.

For the remainder of the half both sides had chances but apart from one or two regulation saves for the keepers it looked as if Jake Dillon’s goal would decide the tie. However, in the last minute of normal time, Mike Butcher was adjudged to have handled in the area and the penalty was converted to take the tie into extra time.

In the second minute of extra time Woodcote went on the attack and three successive shots were charged down in a matter of seconds. Play switched to the other end, the Woodcote defence failed to clear a corner decisively and the ball was rifled home in a crowded penalty area to give Cookham the lead. Then, right at the end of the first half of extra time Cookham scored again to make it 3-1.