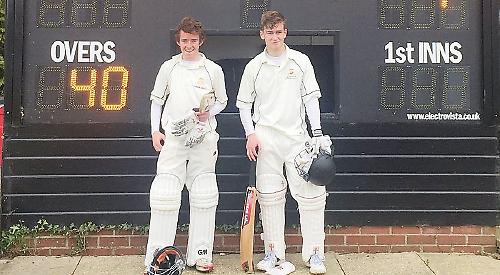 A LONG-STANDING Oratory School record, last set in 2007 for the first wicket partnership, was broken on Saturday during the match against Pangbourne College.

The Oratory, having lost the toss, batted first and Michael Williams, who also plays for Henley and Craig Rintoul, who plays for Sonning, posted an impressive 235-0 off 40 overs, with Williams securing his first century of the season at 118 not out and Rintoul scoring 93 not out. The record opening partnership looked at ease with Pangbourne’s attack and with both playing good cricket, they soon posted a demanding first innings total.

In reply, Pangbourne College made a steady start but fell behind the required rate of runs and this, together with losing regular wickets, enabled The Oratory to win by 80 runs. Jim Buchanan took four wickets with his off spin.