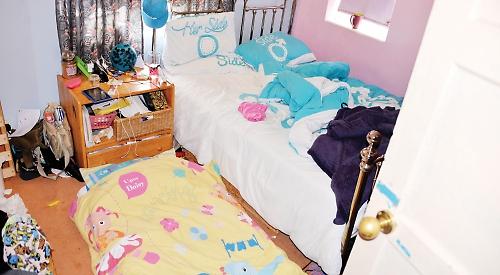 A YOUNG mother has spoken of her misery at having to live in overcrowded accommodation because she cannot find a home in the village where she grew up.

Claire Beavis has been living at her mother-in-law’s house in Church View, Stoke Row, since 2013, sharing a bedroom with her partner Jim Putt and their four-year-old son Harry.

The child has outgrown his cot so he sleeps on a mattress beside his parents’ bed.

Miss Beavis, 28, previously lived at The Close in Woodcote with her 75-year-old father Ralph.

They moved to the village from Baskerville Road, Sonning Common, 22 years ago, when her mother Joan died suddenly, aged 41, and Miss Beavis was six.

Mr Putt moved in with them about seven years ago but the couple had to find somewhere else to live when Miss Beavis became pregnant.

They moved into Ms Simmonite’s house after failing to secure council accommodation and have been struggling ever since.

There is a small amount of social housing in Woodcote but this is allocated on a points system based on people’s need.

Because the couple work and have only one child, they have failed to qualify whenever a property in the village has become available. South Oxfordshire District Council, the housing authority, has advised them to apply for properties in Didcot and says it might be able to pay their deposit.

But the couple are afraid to do this because they have no links with Didcot and they don’t drive and would have to quit their jobs at Flint House, the police rehabilitation centre near Goring, which they cycle to. Miss Beavis works as a housekeeper and Mr Putt is a chef.

If they failed to find work in Didcot, they would struggle to pay rent as they wouldn’t be able to claim benefits for two months after leaving their jobs voluntarily.

The couple cannot turn to the private sector because rents on most properties in Woodcote are too much and they could not afford to pay a deposit and lettings agency fees on the cheaper ones.

Miss Beavis, who has worked at Flint House since leaving Langtree School, says her health visitor has expressed concern about the way the family is living.

The district council accepts that they need another bedroom but says they have no option but to continue applying for properties through its housing register.

Every morning Miss Beavis cycles to Checkendon Pre-School while towing Harry in a trailer. He is strapped in with a harness and wears a cycle helmet.

After dropping him off, she goes to visit her father in Woodcote, which involves crossing the A4074, one of country’s most lethal roads and known locally as the “13 bends of death” due to its record of fatal accidents.

Mr Beavis suffers from chronic obstructive pulmonary disease and is intermittently housebound so she checks his health and helps with any chores.

Miss Beavis then cycles to work via Crays Pond and completes the journey in reverse every evening.

Two years ago, she was hit from behind by a car while turning off the A4074 towards Woodcote.

She was knocked off her bike and injured her leg so had to take a fortnight off work.

She said: “I was almost shunted into the main flow of traffic. I’ve had a few near- misses since then and strongly suspect that I and my son could be dead before we find our own home.

“One time, when I still had Harry in tow, I had a lady in a Porsche sitting right on my backside trying to make me speed up. You get all sorts of abuse because people want to go fast on country lanes.

“Harry will be starting at Stoke Row Primary School in September, which will take some of the strain away, but I’m worried for our future because I can’t see an end to this situation.

“The housing team are so difficult to deal with. You can’t get a face-to-face consultation any more and when you talk over the phone they seem rude and uncaring.

“One time I got a phone call telling me to get my paperwork together because we were in second place on the list for a property in Woodcote.

“However, it went to someone else and they didn’t even call back to tell us. Every time a place comes up locally we bid for it but it never gets anywhere.

“We don’t want to go further out because there’s no guarantee that we’d find work.

“There’s bound to come a point where Harry can’t
practically share a bedroom with us but where on earth are we going to go? It feels like there are lots of unnecessary obstacles in our way.

“The stupid thing is that we don’t need help with the rent because we’ve got jobs. I certainly wouldn’t want to be a stay-at-home mum living off benefits. However, it’s a case of finding somewhere.

“If it’s bad for us now, what’s it going to be like when Harry grows up?

“This isn’t just about me — I feel sorry for the younger generation who are trying to find somewhere to live.

“More and more parents are keeping their adult children at home because there’s no way for them to become independent without getting themselves into debt.”

Miss Beavis says there is a housing shortage across South Oxfordshire and has welcomed the news that thousands more dwellings could be built under the district council’s new local plan.

The document, which would set housing targets up to 2033, could see Woodcote’s allocation increase from 73 under the existing local plan to 208.

In 2014, the parish council and a volunteer steering group produced a neighbourhood plan based on the old local plan target.

The document named up to seven sites where the 73 homes should go. It is now being revised and, according to a recent survey, almost half of villagers believe more homes are needed. Residents said most new units should be small and aimed at young families, especially those with a local connection.

Miss Beavis criticised Woodcote Parish Council and villagers for opposing two planning applications for a combined total of up to 70 homes off Bridle Path.

The proposed schemes, which were not in line with the neighbourhood plan, were refused permission by the district council in January.

But Miss Beavis said: “Seventy-three houses isn’t enough to meet demand and blocking development doesn’t give people who want to stay in the village or move back a fair chance.

“There are plenty of sites that could be developed but it isn’t being allowed. It seems to me that residents want Woodcote to remain a small village, like it used to be. They refuse to accept the need for growth.

“However, there’s a younger generation coming through that need somewhere to live. I feel angry, hopeless and totally let down.”

Geoff Botting, who is vice-chairman of Woodcote Parish Council and chairman of the steering group, said the council had a duty to oppose development not earmarked in the neighbourhood plan. He said the document originally reserved all affordable housing for applicants with a local connection but this was reduced to 20 per cent at the district council’s request.

He said: “We’re going to be pushing harder for affordable and social housing in the new plan.

“We are concerned that there is an excessive supply of large houses while the village demographic is an aging one.

“The revised neighbourhood plan looks set to have a greater focus on small houses and certainly affordable ones, though, sadly, nothing is particularly affordable in this area.

“We will continue building on our commitment to young people and those with local connections.”

Work is about to start on a development of 24 homes at Chiltern Rise, off Reading Road, which will include 10 affordable units, while an application for 20 homes with eight affordable dwellings at the old Greenmore reservoir has just been approved.

Another scheme for nine houses at Woodcote Garden Centre, including four affordable homes, is expected to get the go-ahead shortly.

A South Oxfordshire District Council spokesman said: “Our housing needs team works very hard to support families experiencing overcrowding and has provided assistance and advice to the family on a number of occasions.

“There is a shortfall in housing across the South-East and demand is high in South Oxfordshire.

“We are working hard to address this problem by encouraging housebuilding, particularly an increase in the supply of affordable homes.

“Applicants are encouraged to bid for properties over a wider area and look at private rented options as this will give them a better chance of finding suitable accommodation.”

David Nimmo Smith, a district councillor for both Stoke Row and Woodcote, said: “It sounds as though the family’s situation is unacceptable and I am very willing to see whether I can find a way forward, although there’s no getting around the fact that housing is in short supply.

“I blame the Conservative government of the Eighties for its right to buy scheme, which sold off large amounts of what was then known as council housing.

“There have been problems ever since, especially in rural areas where people want to stay but no new houses are being built.”