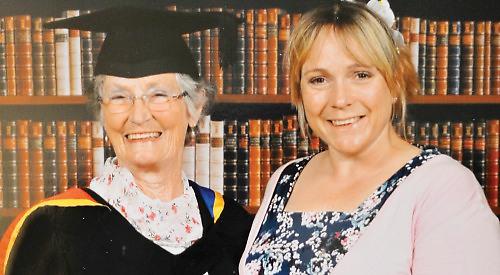 A FORMER teacher has been awarded an honorary degree at the age of 79.

Sylvia Goldsmith, of Bridle Path, Woodcote, was presented with a Bachelor of Education certificate by the University of Roehampton, where she trained for two years after leaving school at the age of 18.

After leaving Whitelands College in Putney, which is part of the university, Mrs Goldsmith taught at a primary school in Lewisham before moving to another primary in Bexleyheath, where she grew up.

She married her childhood sweetheart Albert in 1962 and they moved to Crays Pond five years later after Mr Goldsmith accepted a job as a mechanical engineer for a building firm in Slough.

Mrs Goldsmith then taught at the Little Oaks Nursery, which is based at the Oratory Preparatory School in Goring Heath, for four years before moving to Woodcote and taking up a new post at Englefield Primary School.

Her final teaching post was at a school in Theale before she retired, aged 50.

Since then she has devoted much of her time to her two passions of watercolour painting and gardening. She sat a Royal Horticultural Society certificate in horticulture at Chiltern Edge School in Sonning Common about a decade ago.

She is also a keen supporter of Woodcote Amateur Dramatic Society, which she joined soon after moving to the area. She used to act and help out in various backstage roles and continues to attend all of its performances.

Mrs Goldsmith, whose husband died last year, has three grown-up children and two grandchildren and daughter Charlie accompanied her to the degree presentation at the Royal Festival Hall.

“It came as a complete surprise,” she said. “Like many of my generation, I left school quite young and went straight into vocational training. There was a desperate demand for teachers because of the baby boom after the war.

“You went straight into the profession and there was no question of going on to do a degree but I think the university feels we deserve to be recognised.

“I was contacted about it by a friend who I studied with at the same time and at first I thought it was a joke. However, the university assured me it was genuine.

“I was really excited and didn’t sleep the night beforehand. There were about 2,000 of us there so we didn’t go up individually but each year group stood up to receive a round of applause. There was such a wonderful atmosphere and everyone was really happy to be there.

“I haven’t told any of my friends yet because so many of them went to university and I felt a bit embarrassed that I’m only just getting my degree now!

“However, I’m really proud to have it and I don’t mind people knowing now.”