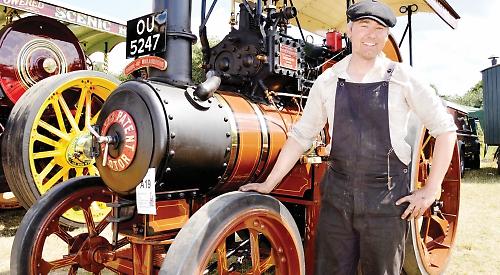 THIS year’s 54th annual Woodcote Rally has been hailed as one of the best to date.

Thousands of families visited the event, which took place on farmland between Tidmore Lane and the A4155 last Saturday and Sunday.

Organisers say attendance was the highest they have enjoyed in recent years so they hope to beat last year’s proceeds of £15,000 by a significant margin.

Exhibitors included the Marcham family, of Wayside Green in Woodcote, who attended with their 1930 12-ton Fowler DNB steam roller “Arfur”, and the Crumps, of Roke, who brought their 1916 eight-ton Aveling and Porter roller “Loretta”.

Tarmac firm Hazell and Jefferies, which is based at Mount Pleasant Farm in Whitchurch Hill, was displaying three Sentinel wagons from the Thirties, a 1930 Wallis and Steevens oil bath tractor called “Duke of Wellington” and its 1934 Burrell showman’s engine “William V”.

There were parades in the main arena as well as working vehicle displays and competitions in which owners had to manoeuvre their vehicles around obstacle courses in the fastest possible time.

There were also food and drink stalls, an arts and crafts marquee, a real ale bar and a music stage with local performers including Chris Hawes, the co-founder of Goring Unplugged, and Rush Keeper.

The sun shone throughout the weekend, with temperatures reaching 26C, and organisers made regular announcements reminding guests to drink plenty of water. Paramedics treated at least three people suffering from heat exhaustion. A dog also had to be rescued from a parked car after being left inside by its owner. Passers-by smashed a window to free the animal.

Proceeds from the event, which are yet to be counted, will be shared between good causes in and around the village by the Woodcote Charitable Association, which is the organiser.

Spokesman Andy Crockett said: “It was absolutely brilliant and it has to be one of the best rallies we’ve ever had. There was a huge increase in visitor numbers on last year and takings on the gate were massively up on both days.

“We hope visitors were as delighted as we were. All the feedback we’ve had so far from guests, traders and exhibitors is that it was a big success.

“I think the weather helped. It was very hot indeed, which most people coped well with though I was outside most of the weekend and got burned to a cinder!

“I wasn’t aware of the incident with the dog but we did stress repeatedly that owners should not leave them in their cars as they are very welcome on the festival site.”

Prizes in each of the rally’s classes will be awarded at a ceremony at Woodcote village hall in November, when the final total and beneficiaries will be announced.