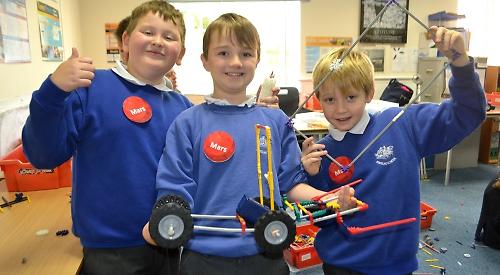 A BUDDING astronaut was the guest of honour at a science fair at the Oratory School in Woodcote.

Dr Suzie Imber, a physicist and space researcher who won the BBC reality TV show Astronauts: Do You Have What It Takes? in October, gave talks and demonstrations to year five and six pupils from 11 schools including Stoke Row, Sonning Common, Caversham and Ewelme primaries.

She showed them how star systems are structured using a television display and made miniature comets using dry ice with help from Dr Amanda Gemmill, a GP at the Goring and Woodcote surgeries and a friend since the women studied together at the University of Leicester.

Dr Imber, who is set to join the European Space Agency after passing a range of endurance tests, also judged the children’s experiments and awarded prizes to the best examples alongside Oratory headmaster Joseph Smith.

The year six winner was Ollie Tyler, from Ewelme Primary School, while Alice Burton, from Sonning Common primary, was runner-up in the year five category.

Dr Imber said: “It’s brilliant that the school is hosting this. They’ve brought so many kids together in one place and given them a chance to see what it’s like being a scientist.

“They’ve all had a great time and enjoyed doing the kind of experiments they can’t necessarily do in the classroom.

“I’m really grateful to have had the opportunity to take part.”