Race for the serious and fun runners 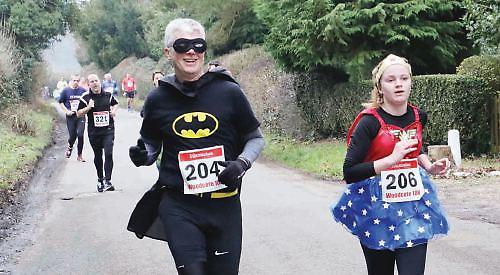 The annual event, which is organised by Pangbourne Rotary Club, is expected to have raised more than £5,000 for good causes after attracting a record 507 entries.

Competitors gathered at the village hall in Reading Road on Sunday morning and set off shortly after 10am.

They followed a circular route to the outskirts of Goring and back via Goring Road, Battle Road, Icknield Road and South Stoke Road.

The race is dubbed “the toughest 10km in the South Chilterns” because it includes a steep downhill section on the approach to Goring and an even steeper uphill dash to the finish line up Mile End Hill.

First home was 26-year-old Chris Lucas, from South Stoke, who finished in a time of 35 minutes and 57 seconds.

He was competing for the fourth year running, having come second in 2016 and fourth last year. He has also won the Goring Hairy Legs 12km race three times.

Mr Lucas, an engagement
co-ordinator for Intelligent Health of Reading, which promotes the benefits of exercise, was watched by his parents David and Hilary and brother Tim.

He said: “I’ve come fairly close to the front before but this is the first time I’ve won. It helps that I live nearby so I was able to practise the route before the day.

“It was tough because the first half is downhill and you have to try to conserve your energy for the last hill.

“I feel really happy to have won. I’d definitely like to do it again next year.”

The runner-up was Richard Kinnersley, 33, from Twyford, who came home in 36 minutes and 14 seconds, and third was Ryan O’Brien, 29, from Tilehurst, who was another 19 seconds behind.

The first woman home was Amber Gascoigne, 38, from Reading, who finished in 38 minutes and 53 seconds.

A previous winner of Hairy Legs, she was taking part in the event for the first time.

The second woman home was Faye Sharpley, 33, from Thame, who crossed the line in 43 minutes and 11 seconds, while third was Chantal Percival, 32, of Greenmore, Woodcote, just 10 seconds further behind. Among the participants were Ralph Drury, from Checkendon, and his daughters Lottie, 18, and Hazel, 15.

Dr Drury, 49, a GP at Sonning Common health centre, ran the course dressed as Batman while Lottie, who studies health and exercise science at the University of Bath, was dressed as Wonder Woman.

The pair raised more than £400 for the Children’s Society.

Hazel, a pupil at Langtree School in Woodcote, who used to be part of Henley Rowing Club’s under-15 squad, came first in the under-20 females category with a time of 54 minutes and 11 seconds.

However, she went straight home with her family not realising she had won until her father looked up the results online later that day.

Dr Drury, who had taken part twice before, finished in 58 minutes and 43 seconds, the same as his eldest daughter.

He said: “I thought the costumes would stimulate a bit of interest and I’m pleased to say they didn’t chafe too much.

“People were certainly cheering us on the day and we heard a lot of children saying, ‘look, it’s Batman and Wonder Woman’.

“Hazel shot ahead of us early on but we didn’t realise she’d done so well, so unfortunately she missed the prize-giving.

“She was very happy when we told her afterwards, though, while Lottie and I were pleased to finish in under an hour.

“It was particularly good considering the training was a bit ad hoc and we couldn’t always find time for it.

“We were a bit tired at the end but it wasn’t too bad and we’re thinking about entering the Goring 10km on March 4.”

He entered as part of his training for a Guinness world record attempt in which he hopes to complete the London Marathon in the costume while raising money for the National Autistic Society.

He said: “I’m pleased just to have completed it in under 45 minutes because it’s a very tough course, especially when you’re in fancy dress.”

The event used to be run by the Goring and District Lions Club until the group folded due to dwindling membership four years ago.

Forty per cent of the proceeds will go to Diabetes UK while the remainder will be shared between Rotary International’s polio eradication campaign and community causes.

Organiser Dick Hoskins said: “It went very well and I think the runners really enjoyed it.

“The number of entries has been steadily increasing since we took over and I think the introduction of online registration has helped.

“We were also very lucky with the weather as it was relatively cold and the runners like that.”