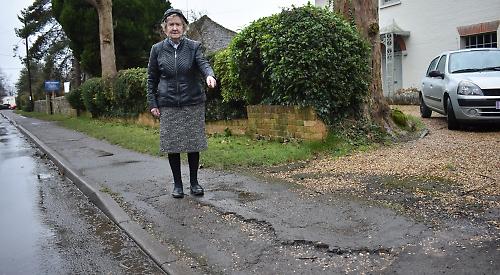 A WOMAN is demanding that a potholed pavement is repaired before it results in someone being seriously injured.

Luckily, she was not hurt but she fears someone soon will be as the pavement is used by hundreds of people every day.

On Thursday last week, she stood by the problem area for an hour and got 42 people to sign a petition, which she then posted to Oxfordshire County Council, the highways authority.

Mrs Vickery, of Folly Orchard Road, Woodcote, said: “I started the petition because I fell over when I was walking back from the bus and caught my heel and fell down.

“I did not have to go to the doctor but it shook me up really badly, especially as I am 84. If it happened again I might not be so lucky.”

She walks along the street several times a day on her way to buy a newspaper, catch the bus or go to WI meetings at the village hall in Reading Road. It is also used by dog walkers, mothers with prams or buggies and villagers on their way to Woodcote Health Centre in Wayside Green.

The 2ft wide pavement is so badly damaged that it is difficult to walk on and many people choose to walk in the road instead as they believe it is safer. At night, people have to use torches to see the hazard.

Mrs Vickery said the pavement had been a problem since she moved to the village from Gallowstree Common five years ago.

She said: “People walk in the road to avoid it, which is dangerous when cars are driving at speed.

“There are always people driving fast around the village, especially opposite the church where the pavement is. You can hear the tyres screeching. I always try to remember my torch when I’m walking in the area at night because it frightens me.”

Fellow villager Bill McKinney, also 84, contacted the county council about the problem before Christmas and then reported it again last month but there has been no response.

Mr McKinney, of Mowforth Close, said: “The parish council also contacted the county council about it. The pavement needs to be fixed. It seems such a simple thing.

“The number of people who use this pavement is tremendous. The houses in this area are mostly for older people and we have the surgery around the corner.”

Mrs Vickery said she decided to launch her petition when Mr McKinney received no response and people were keen to sign it.

She said: “It was mainly children and their mums who wanted the repairs done.

“I could have got more names but it was freezing. One man I spoke to said he had fallen over on the pavement like me. Another woman told me the pavement had been bad for 15 years.”

Mrs Vickery urged the council to to take action as soon as possible.

She said: “So many people use the pavement to get to and from the estate I live on because it is close to the main entrance.”

Councillor Geoff Botting, vice-chairman of Woodcote Parish Council, said: “Pavements and roads in parts of the village are in a dreadful state but that is common around the county because the county council is strapped for cash and struggling.

“We are sympathetic and will do our best to help but it’s an uphill struggle with the constraints on county council expenditure.

“We advise all residents to report problems on Fix My Street — the more reports that are made the greater the chance of something getting fixed.”

A spokesman for Oxfordshire County Council said: “We will check the site and arrange repairs.”