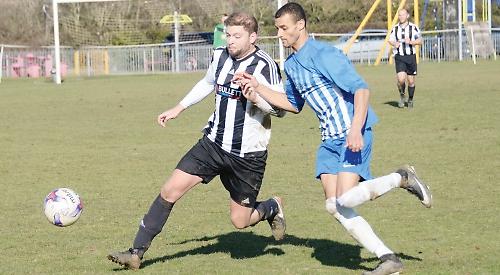 IN front of a bumper home crowd last Saturday, Woodcote/Stoke Row stormed into the semi-final of the Berkshire Trophy Centre Senior Cup with an emphatic win against one of the best teams in the Thames Valley Premier League.

Marlow, who were last team to defeat Woodcote in the league back in September, were left trailing in the wake of some good finishing with the Dillon twins, Frank and Jake, providing a master-class of their own.

There was little sign of the drama to come in a tense first half with the deadlock not broken until the 40th minute. With Woodcote on the attack the Marlow defence cleared the ball to what looked like safety but Frank Dillon had other ideas as he drove the ball low and hard into the corner of the net from 30 yards.

Woodcote might have increased their lead in the first minute of the second half but Jake Dillon shot over. Eight minutes later he made amends for that miss by creating goal number two when he waltzed past his marker, pulled back from the byline and a defender deflected into his own net.

It was 3-0 in the 58th minute and this time it was Frank Dillon who scored his second of the afternoon. He took a corner from the right and the ball came back to him in a wide area and he looked up and flighted a fine shot into the far top corner.

Frank Dillon’s afternoon was far from finished as three minutes later he turned provider. All afternoon his corners had caused panic in the Marlow defence and in the 61st minute his corner was met with a bullet header by Sam Green to make it 4-0.

Marlow rallied briefly and they pulled a goal back in the 66th minute, but straight from the kick-off Bullett was put in the clear and his chip made it 5-1. It was then left to the Dillon twins to put on a show of their own for the final Woodcote goal. Frank Dillon’s pinpoint free kick found Jake and his deft header flew into the net for 6-1 with 20 minutes remaining.

Marlow pulled one back in the dying minutes in a match that saw Frank Dillon named man-of-the-match with his brother close behind in a performance from the home side that saw good displays all over the pitch.