Headteacher praises staff and pupils as he moves on 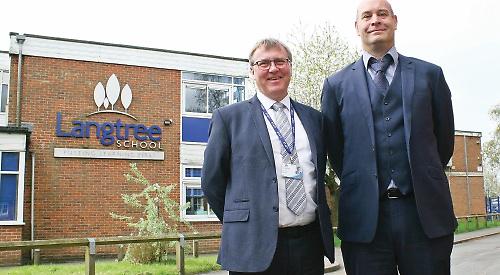 THE headteacher of Langtree School in Woodcote is moving on after 13 years.

Rick Holroyd has been appointed head of King Alfred’s School in Wantage.

He said he was proud of Langtree’s accomplishments during his tenure, which include a record set of GCSE results last year, conversion to an academy and retaining the school’s “outstanding” Ofsted rating since 2009.

Mr Holroyd, 57, has introduced a number of new initiatives, including the annual Langtree Challenge, which is similar to the Duke of Edinburgh’s Award and is run in partnership with the BP research centre at Whitchurch and Invesco Perpetual in Henley.

Students win points towards a bronze, silver or gold certificate by taking part in a range of activities, from working a shift as a student receptionist or leading an assembly to accepting student leadership roles, running a charity fund-raiser or representing the school or county in a sport.

He has also introduced “creativity days”, when pupils take part in team-building activities, go on school trips, take part in music, art and design projects or listen to visiting speakers.

Mr Holroyd oversaw the school’s conversion to an academy in 2012 and the installation of a £227,000 floodlit artificial pitch which was opened by Olympic hockey star Helen Richardson in 2015.

The pitch is suitable for many sports and is used by local sports clubs and youth and community groups. Earlier this year, Langtree received the Schools, Students and Teachers Network’s educational outcomes award after being placed in the top 20 per cent for GCSE results nationally. Seventy-eight per cent of students passed English and maths at grade 4 or above, the equivalent of the old C grade.

The school was also named one of Britain’s top state secondaries by Tatler magazine.

Mr Holroyd, who is married with two children and lives in Purley, said: “I don’t think you can ever achieve everything there is to be done in a school but Langtree is in a very strong position and I feel that excellent teaching has become ingrained in everything we do.”

He said he had been looking for another challenge and was “very excited” about his new role, which he will begin in September.

He said: “The school has a lot of ambitions and I’m looking forward to meeting my new students and colleagues.”

Mr Holroyd was born and educated in Sheffield and sat both an English degree and his teaching qualification at the University of Leeds before taking on a teaching post in the area.

He moved south in 1984 to teach at Theale Green School, where he progressed from teaching English to becoming head of the subject with special responsibility for teacher training.

He was appointed deputy head of Denefield School in Tilehurst in 2001 before moving to Langtree. He took over from acting head Sam Peates, who still lives in Woodcote and chairs the village green committee and its football and cricket clubs.

Mr Holroyd said: “I thought it was a really good opportunity to develop a small community school in a rural area. We’ve been very successful in working with our partner primary schools and opening up our site to other youth and adult groups.

“We’ve improved our academic results significantly and have won numerous awards for progress and attainment, which we’re very proud of. The school is in great shape as a result and has a good standing in the community — it’s very popular and heavily over-subscribed.

“We’re very proud that students and parents speak highly of us. Ofsted is all well and good but the community’s views are much more valuable and the number of applications we receive is gratifying.

“We don’t have a sixth form but we’ve been as imaginative as possible in creating leadership opportunities for our students and helping them to develop the skills that employers will be interested in.

“Initiatives like the Langtree Challenge aren’t linked to academic attainment and they help students to become more confident and feel happier about school.

“The curriculum has also become very regimented lately so the creativity days are good for encouraging students to use their imaginations.

“From the moment I turned up for interview, I knew I’d take the post if it was offered because the students were wonderful, as they’ve always been.

“They’re a pleasure to work with as they’re loyal to their school, well-behaved and have a strong commitment to learning. When visitors come to look around, we’re very proud that it’s always one of the first things they notice.”

Mr Holroyd will be succeeded on an interim basis by deputy head Simon Bamford until a permanent replacement is appointed.

He said: “Simon is hugely capable and a wonderful colleague and I know he will do an excellent job with the support of our senior team. The school is in very safe hands.

“In the long run I’d hope the school maintains its focus on treating students as individuals. They’re not just cells of data on a spreadsheet but unique young people.

“I also hope the school keeps up its high quality of teaching to meet the challenge of the changing GCSE specifications and I’m confident that it is capable of doing so.”