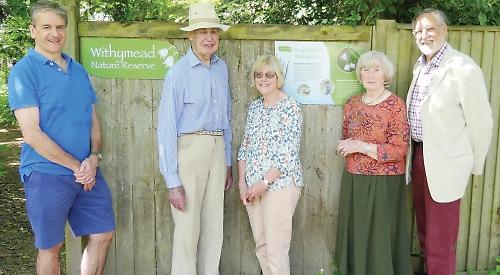 NEW signage is being installed at the Withymead nature reserve near Goring.

It will replace the old black and white signs which have stood at the site on the village’s northern outskirts for many years and includes a new logo designed by graphic artist Linda Francis.

The signs are mostly in green, brown and blue to symbolise the River Thames and its habitats and incorporate splashes of white representing the Loddon lily, which blooms at the 22-acre estate every spring.

They will also include discreet information panels outlining the history of the reserve, which once housed the boatyard of inventor Samuel Saunders, who pioneered the Consuta boatbuilding method and built the steam launch of the same name.

It was then briefly owned by river operator Hobbs of Henley before becoming the home of Anne Carpmael, a keen naturalist who lived there for almost 60 years and created a habitat for both native and migratory birds. A charitable trust was set up in her name to manage the reserve before her death in 2003.

It opened to the public in 2005 and boardwalks were installed through its reed beds the following year.

Last summer it purchased an all-terrain wheelchair so that disabled visitors may negotiate muddy and waterlogged areas.

The reserve forms part of Goring’s entry into the annual Britain in Bloom competition and has numerous hides and nesting boxes as well as being a habitat for grass snakes and slow worms.

The signs, which were funded by the Gatehampton and Dorothy Holmes charitable trusts and the Goring Gap News, will be complemented by a revised visitor leaflet and a map.

The project was overseen by villager Ivor Coleman, of Lockstile Way, and includes photography by Withymead wardens Roger Wyatt and Sue Morris. The first batch has been unveiled by a group of supporters including donors, current and former trustees as well as Ms Carpmael’s descendants and former friends.

They took a walk around the site off the Ridgeway path before enjoying sparkling wine, tea and cake at the visitors’ centre.

Trustee Jenny Hedge said: “Ivor has been instrumental in driving this forward and producing a totally new look which is in tune with nature.

“We want to provide more information about the reserve so that visitors can fully understand why Anne Carpmael wanted to protect this special place.”

Mr Coleman added: “This is a tangible step in the trust’s goal of making Withymead a more engaging and accessible place so that everyone can better share in its natural splendour.”

The reserve is open between 2pm and 5pm on the last Sunday of every month until the end of August. Admission is free but donations are welcomed.