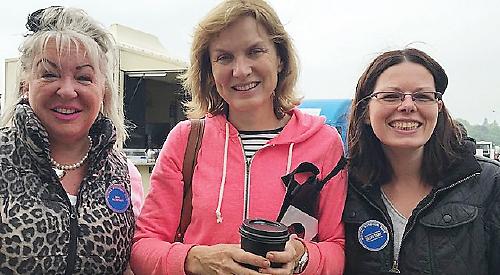 AN equestrian event launched by a woman from Woodcote is turning heads in high places.

TV presenter and newsreader Fiona Bruce was among the 330 people who took part in the third annual Royal Windsor Fun Ride, which is run by Amanda Stewart.

Riders in Saturday’s event had to tackle a 10-mile course around the Royal Windsor Great Park, including about 40 jumps and a water crossing.

Amanda and her events secretary Sinead Archer, who also lives in Woodcote, spent a few minutes chatting with Bruce before she set off on her ride.

She said: “It was her first time here and she thought it was great. We had a good old chat and she was lovely and very professional. She also allowed us to take a photograph with her, which was nice.

“We didn’t have any falls throughout the day although we did have to pull one horse out of the water. It was a hot day and I think it was keen to stay in!”

Also present were Robin Mackenzie, who has previously commentated at the Henley Show, and former Horse and Hound editor Lucy Higginson.

Amanda, who was helped by a team of about 50 volunteers, many of them also from Woodcote, said: “The ride has grown hugely since its first year.

“I’ve already got people entering next year and I’ve been approached by a sponsor as well.”