School fair raises £3,500 as families have hours of fun in the sun 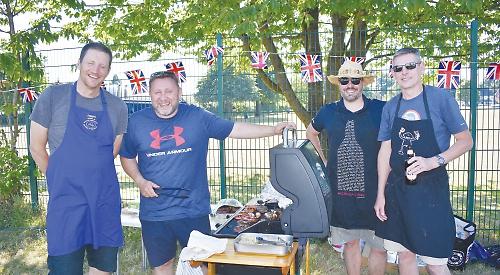 The event, which took place at the school off Reading Road after lessons finished on Friday, included a bouncy castle, splat the rat, balloon darts, tin can alley, hook-a-duck, chocolate tombola and a raffle with prizes including a luxury wine hamper and a tour of the West Berkshire Brewery. Parents ran a barbecue and bar serving Pimm’s and other drinks donated by the brewery and there was also a lucky dip, an outdoor chess tournament, a recycling stall and a stand selling cream teas with scones baked by year 6 students. Many of the stalls were run by pupils.

A choir from years 1 and 2 sang songs from Disney’s Moana while the older pupils performed a medley of pop songs. There was also a display by the school’s Inkai judo club, penalty shoot-outs with football coach Paul Meakin and live music by parents Nadine and Mick Bickerstaffe, who are members of a local band called Sub Zero.

The fete concluded with a tug-of-war between a team of boys and a team of girls, which the latter won. The annual event was organised by the Friends of Woodcote Primary School and the proceeds will go towards refurbishing an aging outdoor area currently used by the younger children.

Headteacher Liz Hunt said: “It was a fantastic day and was made even better by the beautiful weather. It’s all about creating something fun for the children to take part in and the parents from the friends group certainly managed that. They deserve many thanks for their incredible efforts.”

Organiser Carla van Heerden said: “It went brilliantly and I can’t believe we managed to raise so much money in two hours. Everybody had a lot of fun and nobody wanted to leave at 7pm — we could easily have gone on for another hour or so.”