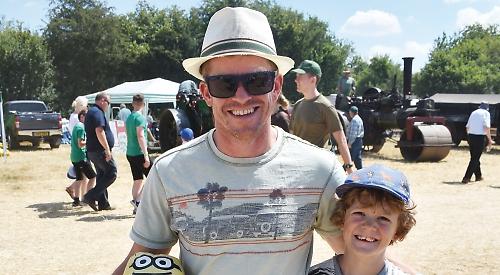 THE closing matches of the World Cup didn’t affect attendance at this year’s Woodcote Rally.

Thousands of people attended the 55th annual event, which took place on the field between the A4155 and Tidmore Lane last Saturday and Sunday.

Visitor numbers were higher on the opening day despite clashing with England’s third place play-off in Russia and only slightly lower for Sunday’s final between France and Croatia.

Exhibitors came from across South Oxfordshire and further afield and included regular exhibitors the Crump family, of Benson, the Marchams, from Woodcote, and three Thirties Sentinel wagons owned by tarmac firm Hazell and Jefferies, which is based at Mount Pleasant Farm in Whitchurch Hill.

Also on display was a 1949 Bedford M Type formerly owned by removals firm Wilkins of Henley, which was still decorated in the company’s livery, and 35 veteran cars including a 1909 Ford Model T, the first of its kind to be mass produced, owned by Rowland Passey of Benson.

One new exhibitor this year was the Reading Astronomical Society, which set up a telescope that allowed people to look at the sun by projecting an image on to the inside of a cardboard box.

There was also a remote-controlled animatronic dog which walked around “talking” to children as its mouth moved in time with the operator’s. About half of those taking part were from the Woodcote area while others were mostly from Buckinghamshire, Bedfordshire, Hampshire and Surrey.

There was a main arena with events including tractor displays, miniature steam rides, and bird of prey and hot air balloon displays while the Cholsey Silver Band and Otis B Driftwood Strolling Jazz Band performed in the country area.

Craftsmen gave displays of thatching, wood turning and horse-drawn ploughing and the Campaign for Real Ale ran a beer festival with 35 local brews on offer. There were also bars selling prosecco, cocktails, Pimm’s and gin while Time For Tea, of Henley, ran a vintage tea room selling cream teas and pastries.

Guests were entertained by bands playing in a variety of styles. The line-up included rockers Rushkeeper and Drumclub, a group of young drummers from Langtree School in Woodcote, American-style country act Dolly and the Clothespegs and blues singer Heather Jayne and the Red Shoes.

Andy Crockett, of the rally’s organising committee, said: “It went really well although it did get quieter at about 3.30pm on the Sunday due to the World Cup final. I suppose it would have been even quieter if England had got through — I probably wouldn’t have been there myself!

“We started setting up a week beforehand and it was pretty tough because of the heat. We were exhausted by the opening day but we pulled through and it was definitely worth the effort. We were very pleased with the turnout.”

The proceeds will be handed over at the rally’s prize-giving ceremony, which will take place at the village hall in the winter.

Since its launch by the Woodcote Charitable Association in 1964, the rally has raised £481,000 for causes in and around the village.