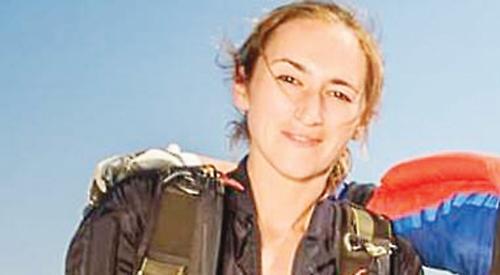 A WOMAN from Woodcote has helped set a skydiving world record.

Charlotte Pope, 36, a skydiving instructor, was one of 60 women who took part in two of the largest ever choreographed formation jumps on two days last week.

They leapt out of three planes at 18,000ft over an airfield near Kharkiv in Ukraine and had less than 90 seconds to form a flower shape consisting of a central hub with five “petals” sticking out then change shape twice.

After coming together and creating the shape by gripping each other’s ankles and feet, the women in the middle remained in place and gave instructions by nodding their heads to those on the outside who swapped positions.

Miss Pope, who was on the outside, had to grab the left leg of the woman in front of her with her right hand and then, on a signal, let go, turn 90 degrees and grab another team-mate’s arm. On another signal, she returned to her original position.

The women had to complete the manoeurvre before reaching 6,000ft above ground at which point they began peeling away from one another to be far enough apart to open their parachutes safely.

By this stage they were falling at about 120mph, the fastest a person can reach in freefall before air resistance stops them going any faster.

Ms Pope, who grew up in Woodcote and whose parents Nicholas and Caroline still live there, was one of about 10 Britons who took part in the record attempts.

The first dive beat the previous record of 56 set in 2016 and then they added four more women to break that record the next day.

The challenge was organised by the Euro Chicks women’s skydiving squad to raise awareness of Women on Wings, a charity that campaigns for women’s equality in India.

Miss Pope read about it online in January and signed up.

She said: “I’m sure we all felt a bit of pressure during the ascents but we had to stay calm and not move about much because the oxygen is limited at high altitude.

“Once we were out, my role was to just let go of certain grips and pick up others when the time came.

“It was very much down to the women in the centre as they had to be sure we’d done each formation properly before they signalled us to change.

“Some people on the outside had a bit more movement than me but they still tried to keep it as small as possible so that there wasn’t too much to do.

“The formation was so big that I really couldn’t see what was going on outside of my own little section, although I had this sense that it was a nice skydive.

“When the organisers watched it back they said it was awesome and the judges approved it, which we were pretty happy with.

“We had planned a third jump with an even larger group on Friday but it didn’t work out.”

She got into skydiving after taking part in a tandem jump for the Teenage Cancer Trust in 2010. She enjoyed it so much that she trained to become a solo diver at RAF Weston-on-the-Green, near Bicester.

She had to do seven more tandem jumps then carry out 10 solo jumps under supervision and another from 5,000ft to show she could bail out of an aircraft if needed.

Miss Pope qualified as an instructor in 2015 after carrying out more than 1,000 jumps and she represented Britain at European level.

She now teaches part-time at Hinton Skydiving Centre near Banbury.

She got involved in competitive diving through the friends she made in the sport and first took a course to improve her solo skills.

In 2014 she was part of a British team that won gold in the annual European Skydiving League and was also part of a 40-strong international team that performed a formation jump at Hibaldstow in Lincolnshire.

Miss Pope said: “I did my first ever skydive because I thought it was something a bit different and if it raised a bit of money for charity, then so much the better. I absolutely loved it and started training three weeks afterwards as I didn’t really have any hobbies outside work and seeing other people enjoying themselves at the drop zone made me realise it was worth carrying on.

“I quite liked the idea of having a world record so I put myself forward as soon as I read about this attempt.

“I did feel a bit nervous as it got closer because you always worry that you’ll be the one who messes it up.

“They had the dives planned out and it was just a case of turning up, looking at the formations and doing them over and over again. We did a lot of walkthroughs on the ground every morning and before every flight.

“Every time we jumped, we had a debriefing where we’d watch the video of it and discuss what we could have done more efficiently.

“A lot of the challenge was figuring out the timings for the three different aircraft and when we should jump out.

“That was the hardest bit, along with getting everyone out as quickly and efficiently as possible.

“There was a great atmosphere throughout the week — everybody got on really well with each other and, of course, we were incredibly happy with how well we did.

“It feels odd being back to normal life but I feel proud to have a record and so do my parents. My mum has been watching all the different videos and can pick me out immediately in all of them!”