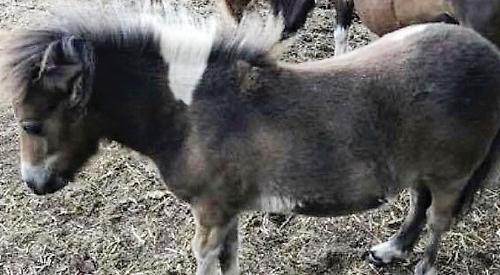 A GIRL has been left devastated after her Shetland pony was stolen from its field at night.

Mariella Edwards, 10, from Woodcote, had been caring for Coco since she was born in April.

Now her mother Marie, an experienced breeder, is appealing for the animal’s safe return to the family’s 15-strong herd of ponies.

Coco was found to be missing at 10.30am on Friday by Mariella and her grandfather Nelson Rogers.

The pair drove back to Woodcote to tell Mrs Edwards before all three returned to the enclosure between Crays Pond and Goring to try to work out what had happened.

They found no damage to the fence nor any gaps in the hedgerow that Coco could have escaped through and checked the areas where she could have been hiding.

The family then realised she had been stolen and alerted the police.

Mrs Edwards, 38, is concerned for Coco’s health as it is stressful for a foal to be separated from its mother at such a young age and she could become malnourished as she was a month or so from being weaned.

She believes the pony was taken to be a pet after a family friend saw two young women petting her in the field on Tuesday last week.

The pair, who spoke with eastern European accents, claimed the pony was theirs when challenged, so the friend ordered them off the land and they drove off in a silver Ford hatchback.

Mrs Edwards, who lives in Whitehouse Road with Mariella and her husband Darren, said: “We hadn’t microchipped her or got her a passport as we usually wait until they’re weaned, so she can only be identified through her appearance.

“Some people know how to care for foals and will be able to provide the right supplements but if they don’t know what they’re doing then her health could deteriorate, especially with the stress.

“Not only has she been taken from her mother, but she was used to being in a big herd and it will be very lonely for her to suddenly be on her own. Those women had obviously climbed over the gate because there’s no public footpath and you can’t just wander in without knowing it’s private.

“I’d seen the herd on the Thursday night as I check the field at least once a day.

“The foal had obviously been lifted over the gate and taken away in a vehicle. They’re only the size of a Labrador at that age and one person could easily carry them.

“I put her picture on Facebook and it has been shared more than 500 times. People are absolutely appalled that somebody could do this to such a helpless animal.”

She said that Mariella, who attends Woodcote Primary School, loves horses and riding and helped her look after the herd.

“We’re not asking for people’s sympathy but just want to get the word out about this latest theft and warn people to be vigilant. “