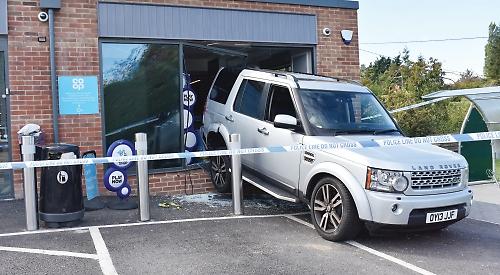 A SHOP was ram-raided for the second time in four years.

A stolen silver Land Rover Discovery was reversed over a steel bollard and into the front window of the Co-operative Food shop in Bridle Path, Woodcote, in the early hours of Sunday.

A dark-coloured saloon car, possibly a BMW 5 Series, also stopped at the scene.

Four men dressed in black and wearing balaclavas got out of the cars and smashed the shop window with sledgehammers and axes.

They then tried to remove a cash machine and load it into the Land Rover but after several failed attempts they fled.

The gang returned less than two hours later to try again and once more reversed the Land Rover through the broken window.

However, they again failed and then found the vehicle had become stuck on the bollard so they climbed into the second car and drove off. Their haul included a bottle of Lambrini.

Police called to the shop cordoned off the area while forensics teams searched for evidence.

Co-op staff cleaned up the mess and the shop re-opened later in the day. Dc Dan Tibble, of Thames Valley Police, said: “The offenders made more than one attempt to steal the cash machine and their efforts appear to have been thwarted by one of the vehicles becoming stuck.

“I’m appealing to anyone who believes they may have witnessed the incident to make contact with our officers and am particularly keen to hear from anyone who may have dashboard camera footage.”

Geoff Botting, vice-chairman of Woodcote Parish Council, said: “People in the village were understandably very surprised at this. It is very disappointing as these things rarely happen in Woodcote but it seems to be the way of the world nowadays.”

The shop, which was closed for three months last year while it underwent a £1.2 million refurbishment, was previously raided in January 2015.

A gang ripped a bench out of the ground and rammed it into the front of the shop using a convertible car before making off with £8,000 worth of cigarettes.

Anyone with information should call the Thames Valley Police non-emergency number, 101.