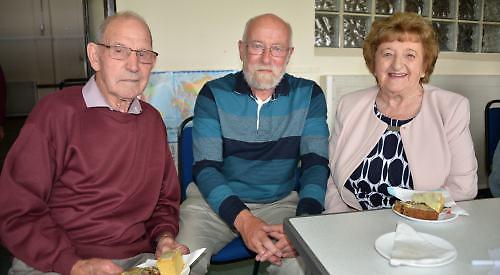 A DOCTOR at Woodcote surgery has retired after 20 years at the practice.

Dr Angela Rowe, 55, joined the joint practice with Goring in September 1999 after moving to the area with her husband Robert Willows.

She opted to retire early as the couple’s daughter Iona has just gone off to university and they can spend more time together.

Mr Willows was an environmental scientist for the Environment Agency in Reading but retired several years ago.

Dr Rowe, who lives in Whitchurch Hill, grew up in London and trained at St Thomas’ Hospital and worked at a surgery in Okehampton, Devon, before moving to Woodcote.

She said she had enjoyed working in the village as it allowed her to build close links with the community.

She also served for a time as chairwoman of the Woodcote Volunteers, who drive elderly residents to medical appointments if they do not have their own transport or have mobility issues.

About 100 people, including former patients and colleagues, attended a farewell party at the village hall on Saturday.

They enjoyed tea and cakes, many baked by Dr Rowe herself, before listening to her farewell speech.

Afterwards, she said: “The party had a nice, relaxed atmosphere with lots of great cakes and chat.

“It was great for my patients to see my family in person as they often ask after them.

“I’d always wanted to be a doctor since I was a teenager and the years have gone by so quickly since then.

“When I was researching my speech, I worked out that I’d probably held something like 48,000 appointments, which is a pretty staggering amount. I couldn’t quite believe it had been that many.

“It has been lovely getting to know people over 20 or so years, seeing them have families and watching their children grow up.

“The best part of the job has been knowing that I’m a big part of other people’s lives. You’re constantly interacting and developing relationships with people over many years.

“Patients have been very kind — they said it was a shock when I announced that I was taking early retirement but they’ve been lovely to me. I’ve had loads of gifts and cards and many a kind word, which makes it all so worthwhile.

“It has been a real privilege to serve the people of Woodcote, which is where the vast majority of my practice has been based, as people here really keep an eye out for each other.

“It’s sad to be leaving in some ways and I do have mixed emotions. It’s not easy to step away after such a long time and I was actually back in on Monday just to tie up the last loose ends.”

Dr Rowe said people skills would always be the most important part of the job.

She said: “Communication and interaction with people is crucial and that skill will never change one iota. Whatever the future brings, that will always be vital.”

She will be replaced by Dr Amanda Gemmill, who joined the surgery on a part-time basis about a year ago and was previously at the Hart Surgery in Henley.

Dr Gemmill will now work more hours while scaling back her commitments as a science teacher at the nearby Oratory School.

Dr Rowe said: “I know patients will be very happy with Amanda.”

Her retirement follows that of Dr Steven Richards, who stepped down from the joint medical practices in June after 30 years in post.