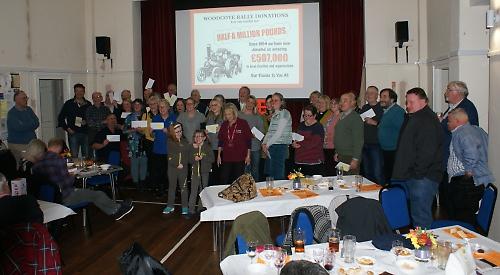 THIRTY-SEVEN charities, community groups and other local causes have received a total of £15,000 raised by the 56th annual Woodcote Rally held in July.

The cheques were presented during a ceremony at the village hall on Friday.

The rally has now raised a total of £507,000 for organisations in and around the village since it was launched by the Woodcote Charitable Association in 1964.

Spokesman Andy Crockett said: “We’re really pleased to have passed the £500,000 mark. The handover event makes it all worthwhile for our committee and association members as they see how their voluntary efforts and hard work have paid off.

“We’ve already started preparing for the next rally as we only really get August off. The hard work starts in the new year.”

This year’s beneficiaries included the Woodcote village hall committee, which received £1,300. The hall has now received a total of £56,700 from the rally.

The latest donation will be put towards its refurbishment programme, which is designed to increase income from rentals.

The Cabin Pre-School* in Woodcote was given £500, which will go towards new interactive whiteboards, while Woodcote Pre-School* received the same amount for an awning for its outdoor play area.

St Leonard’s Church in Woodcote* received £200, which will go towards new toilets, and Christ the King Church was given the same amount to go towards refurbishment.

The other beneficiaries were as follows: Woodcote village green committee (incorporating the football and cricket clubs) — £1,300.

Next year’s rally will take place on Saturday and Sunday, July 11 and 12.

* Denotes those that helped at this year’s rally.