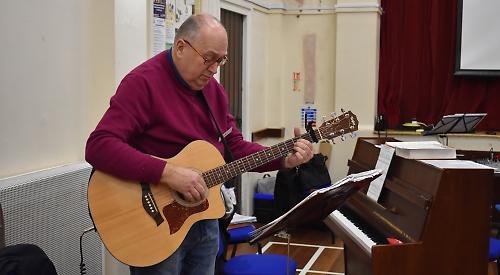 A NEW community church service in Woodcote has been hailed a success.

More than 50 adults and children attended SLOW, which stands for St Leonard’s Outside the Walls, at the village hall on a Sunday morning.

They enjoyed refreshments on arrival before the service was held in the main hall using a projector to show the words to the hymns being sung.

Children watched Bible stories on the big screen and took part in craft activities on the theme of “stilling the storm”, based on the story from Luke’s gospel. They made paper boats.

The morning was aimed at people who struggle to make regular Sunday services at St Leonard’s Church in South Stoke Road and was better suited to babies or younger children as they were free to move around.

There was also access to a toilet, which the church doesn’t yet have.

The parochial church council came up with the idea of the service about two years ago and it is being funded by members of the regular congregation who hope to attract more people to the Christian faith.

It will take place every two months, with the next one scheduled for March 8 at 9.30am.

Rev Smith said: “It went very well and we were delighted with the attendance, which was very high considering how stormy the weather was on the day.

“There was a lively, relaxed and sociable atmosphere and feedback was almost entirely positive. Some people were unsure what to expect but it really gave us space to do something a bit different.

“These days we need to find more ways of helping families to fit worship into their daily lives, although we don’t want to change things completely for those who use the existing services.”