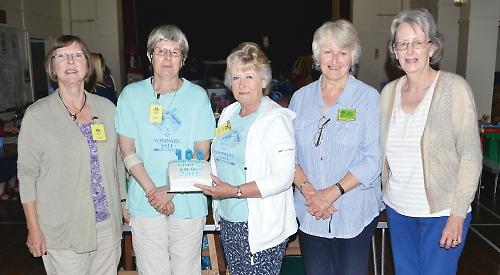 A SECOND-HAND children's goods market which has raised more than £63,000 for its community is set to fold in its 30th year.

The Windmill Sales, which are run by volunteers, take place at Woodcote village hall. They were launched in 1990 and used to be quarterly but now take place only three times a year as takings have fallen from a record £1,000 to about £220 each time.

Founder Barbara Penniall, of Wayside Green, Woodcote, planned to host the final sale on April 24 but then cancelled it due to the coronavirus pandemic.

She hopes to reschedule it in time for Christmas and says there is a slight chance the sales could continue if this makes significantly more money.

She said: “There has been a huge drop in the amount we make, which raises the question of whether the sales are still needed. It’s not that we’ve had enough but people don’t seem to use us like they used to. We’ve got a fantastic band of helpers but the number of buyers and sellers has dropped. We used to get 110 sellers, each selling up to 50 items, but the last few times we’ve only had about 40 to 45.

“The world is very different from 1990, when there was no eBay or Facebook and fewer charity shops. People often gave their unwanted items away or put them in a jumble sale so we had more of an opportunity to raise money.

“Now both parents typically work and there’s a temptation to overcompensate by buying everything new for the children, which I’ve certainly noticed in the village. We still have a market among grandparents who grew up in a different time and see the benefit of having toys and other things in their homes to occupy the grandchildren when they visit. Overall, though, it has been declining.

“It’s a difficult time for everyone and I’m sad that we couldn’t do one more before the restrictions came in as children need things to play with.”

The event is named as a pun on a windmill's sails as they are constantly turning just as many items are constantly re-sold. Mrs Penniall came up with the idea after organising a table-top sale to get rid of some items her children no longer needed. The sales offer discounted second-hand toys, games, equipment and clothes for children from toddlers to teenagers. Sellers take home 75 per cent of the price and the rest is given away.

The proceeds have gone towards the village hall and community centre in Reading Road, which was built in 1990, the war memorial, churches and scout group as well as one-off projects such as new play equipment for the recreation ground.

Mrs Penniall, who organised a champagne reception to mark the 100th sale in 2015, said: “It has been a wonderful experience and brought a lot of people together. The atmosphere among the helpers is fabulous, especially when we’re sorting items on the night before.

“There have been so many lovely people who’ve wanted to help and the amount we’ve raised is a tremendous achievement not for me, but for everyone who has contributed over such a long time.

“It’s rewarding to have made a difference in the village — I walk past things all the time and think ‘the Windmill Sales paid for that’. The projects they’ve supported will be their legacy.”