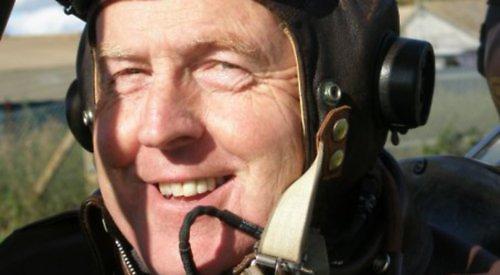 AN airfield near Woodcote which has helped raise at least £1.5 million for charity is urgently seeking a new home.

Dennis and Julie Pearson, who set up Chiltern Park Aerodrome in 1988, face an uncertain future after being given notice to vacate the site by September 24.

It is understood that their landlord is considering alternative uses for the field, which is to the south of the A4074 off Icknield Road and is surrounded by farmland.

The Pearsons have been offered several new sites within South Oxfordshire but say only one is suitable in principle and they would need planning permission for a change of use.

They hope to find somewhere soon as the venture includes a skydiving and wing-walking school which raises money for almost 200 charities, many of which are losing money due to the coronavirus lockdown.

The couple, who have temporarily shut the business and furloughed themselves, also need enough time to relocate.

Mr Pearson, 63, said: “It’s very difficult to move an airfield, especially with this lockdown as you can’t even meet people or arrange viewings. Our hands are tied and we’ve been trying to get our lease extended but with no luck.

“We have got 15 gyrocopters, six aircraft and the various school buildings and I really don’t know what we’ll do with it if we haven’t got somewhere in a few months’ time. I guess we’ll just be out on the street.”

The couple, who grew up in the area and were married at Checkendon in 1983, launched the business after Mr Pearson tried his hand at flying a microlight aircraft in the late Eighties.

He started taking lessons at a venue in Hampshire but both he and his instructor Derek Frank, who now lives in Reading, wanted somewhere nearer home to practice. After a lengthy planning battle he was given consent for a private airstrip on the field next to his house, where he had been running a small saw mill.

This quickly became popular with other pilots so the Pearsons launched their flight school in 1990.

Mr Pearson said: “Derek and I were saying how it would be nice to have our own airstrip as it would save us a long journey every week and the whole thing took off from there.

“The planning process was even more strict than it is now but we were allowed in the end and it wasn’t long before other pilots started turning up. Everything just mushroomed after we set up the flight school.”

The business, trading as Chiltern Airsports Centre, caters for a range of aircraft, including gyrocopters, microlights, helicopters and gliders.

It became the weekend home of the London Parachute School in 2011 and the wing-walking followed in 2014. The Pearsons’ daughter, Hayley, performed one of the first wing walks as a test and later Mrs Pearson took part in one to raise money for Cancer Research UK.

The centre now is the only one in the southern counties to offer all nine air sports recognised by Sport England. It has been registered as a community amateur sports club since 2005, allowing it to focus on fund-raising. Other beneficiaries have included the British Heart Foundation and Macmillan Cancer Support.

About 30 people work there as self-employed contractors and visitor numbers range from about 5,000 to 8,000 a year with a perfect safety record.

The aerodrome also serves as a night-time training ground for the Thames Valley Police helicopter unit and the Thames Valley Air Ambulance as well as an emergency landing and training centre for the Puma and Chinook squadrons based at RAF Benson. Its hangar is also a reserve base for Goring fire station.

Mr Pearson said he understood that his landlord had the right to serve him notice.

“Everything has to end eventually,” he said. “We’ve just got to find a way of dealing with it, however sad it may be.

“We’ve had a few offers of sites but had to reject most of them because they’re too near people’s houses or just aren’t in a safe location. There’s one viable option but we’d need to investigate further.”

Mr Pearson says the community has embraced their business, nicknaming it “South Stoke International Airport” because of its proximity to the village.

“We’re a huge benefit to local hotels and pubs during the season and people just love watching all the activity that goes on, especially the young ones,” he said.

“We’ve thoroughly enjoyed our time here. We’ve devoted more than half of our lives to it while bringing up two children and we’re proud of our contribution to the community.

“We grew up in South Oxfordshire and don’t want to live anywhere else. Sometimes I wonder if this is a sign that I should retire but we’ll have to wait and see.

“I’ve asked the Department for Transport for help finding another base and they’re very keen in principle because there’s a shortage of smaller recreational airfields like ours.

“We’re quite restricted here because it’s under RAF Benson’s main flight path as well as an approach to Heathrow, so we’re having to dodge between the jumbo jets. It would be quite exciting to start a new community asset away from all of that.”

Meanwhile, South Oxfordshire District Council has ordered the airfield to stop hosting glider flights on part of its land.

Several weeks ago it welcomed 20 aircraft from Booker Gliding Club, which is based at Booker airfield near High Wycombe, after the club had to stop flying from there due to the covid-19 pandemic. The gliders were taking off from an area which can’t be used for recreational flights under a planning enforcement notice issued in 2010.

Mr Pearson has also been ordered to remove an unauthorised toilet block which was built five years ago.

He said: “I don’t know who reported it because I haven’t received any complaints. It’s ridiculous because there’s no restriction on commercial flights in that area and I’m not sure what difference that makes in planning terms.”

More than 30 people criticised the decision on social media.