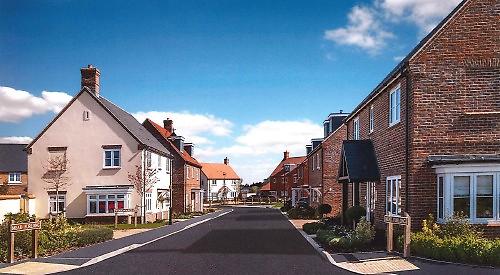 PLANS have been submitted for a total of 86 new homes on two sites in Goring and Woodcote.

McAdden Homes is seeking South Oxfordshire District Council’s permission to build 52 units on a 3.8-hectare field east of Wallingford Road in Goring, immediately north of Springhill Road, while Rectory Homes wants to build 34 properties on about 1.5 hectares of land north of Reading Road in Woodcote.

McAdden, of Spencers Wood, was considering 48 units but increased this following a “virtual” public consultation last month. The site is earmarked for about 46 houses in Goring’s neighbourhood plan, which passed a referendum last summer.

Meanwhile, the Woodcote site is occupied by Chiltern Rise Cottage and neighbouring cottages plus the eastern half of Woodcote Garden Centre. Rectory, of Haddenham, proposes joining the plots up with an internal street to be accessed off the main road, near the Tidmore Lane junction.

A public green space would be established at the woodland east of the garden centre, where trees could be removed. Some are legally protected but the applicant says they are “poor quality” and could be replaced.

Forty per cent of the two-storey homes would be “affordable”. There would be 14 three-bedroom houses (one affordable), 12 two-bedroom houses (eight affordable), four affordable one-bed flats and four houses with four bedrooms to be sold at full price. Most would be semi-detached or terraced with about a third being detached. All would be in red brick and flint with slate roofs to match surrounding architecture and there would be 89 parking spaces including some for visitors.

Rectory says the site is well screened by hedges and trees and it would plant more vegetation internally to “break up the street scenes”. It would lay a new pavement from the site entrance to the nearby bus stops, which could be refurbished.

There would be a “shared surface” for pedestrians and drivers leading to the garden centre, which has a separate entrance off Reading Road.

The applicant says: “The scheme reflects predominant characteristics of the village, namely two-storey properties in a traditional design with good-sized rear gardens. All will exhibit a high level of architectural quality.

“The proposal seeks to deliver additional housing stock which is sympathetic in design and density and sited in a suitable location. It will deliver a well-designed, high quality housing development which is attractive, logical and will cater to local need.”

The cottages’ plot is earmarked for 24 homes in Woodcote’s neighbourhood plan and in 2016 the Oratory School, which owns it, was awarded planning permission for 25. That consent has expired and last year the school applied for 28 but this was never decided.

Meanwhile the garden centre is earmarked for nine houses and the district council gave permission for this number to owner Michael Hill in 2017. Rectory, which is believed to be buying both plots, says there is therefore a precedent for allowing 34 across the two.

Following a request for advice, planning officers welcomed the sites being treated as one but criticised Rectory’s initial suggestion of 36 units, saying this might take up land which could serve as green space. The firm then scaled the proposal back.

Woodcote Parish Council, which oversaw the neighbourhood plan’s creation, is yet to comment and so are neighbours. A decision will be made by the end of September. Woodcote’s plan names up to seven sites where at least 73 new homes should go by 2027.

Neighbourhood plans across South Oxfordshire could soon be updated to reflect a likely increase in housing quotas until 2034.

Elsewhere, plans for 20 homes on another neighbourhood plan site in Woodcote have hit a hurdle.

Richard Hazell got permission in 2017 to redevelop the old reservoir off Greenmore, which is earmarked for that number, but then last year he submitted a second application to change the layout.

He said this was needed after learning that a water main runs under the land so digging foundations could damage it. He had already made two failed bids to build mobile homes on the plot, citing the same reason.

The parish council first opposed his revised layout, saying it didn’t offer enough parking spaces and could increase parking on the main road, which already has problems with congestion and speeding.

Mr Hazell agreed to change the layout again but his original consent has since expired, meaning he will have to prepare a full planning application from scratch.

Malcolm Smith, the parish council’s vice-chairman, said: “We weren’t happy at first but in the end we accepted what he proposed. For whatever reason, the process then dragged on until his first application ran out.

“We’re expecting him to file an identical application soon. As long as they comply with its policies, we’re keen to see all our neighbourhood plan sites moving forward.”