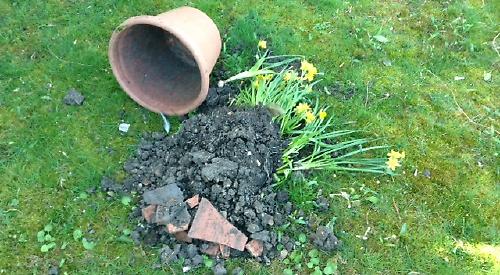 A WORKING party could be set up to tackle crime and antisocial behaviour in Woodcote.

The parish council is considering the idea after residents complained about youths driving dangerously in the village hall car park off Reading Road and threatening bystanders.

There are also concerns about drug dealing taking place in various places, including the lay-by near Greenmore ponds.

The most recent incident happened on Halloween when Tom Booker was threatened with being stabbed when he challenged a large gang who were launching fireworks at other people on the village green.

Later that night, some of the youths climbed on the hall roof and launched rockets at his house.

Mr Booker urged councillors, who include his sister Helen, to improve security in the car park by installing CCTV cameras, barriers, one-way ramps and other measures to deter misbehaviour.

Speaking at an online council meeting, he said: “I’m aware that the parish council isn’t responsible for enforcing the law but it’s ultimately responsible for damage to the hall and also liaises with the police on neighbourhood crime.

“On Saturday evening, after talking to youths who were setting off fireworks, I was threatened with being stabbed, verbally abused and had fireworks thrown at both me and my house. This left my family very anxious, distressed and fearful for our safety and it wasn’t a one-off — there are long-standing issues with antisocial behaviour.”

Mr Booker, who runs the Church Farm commercial estate opposite the green, said the council should ask the police to visit the village more often.

He said the police presence had declined since former Woodcote police community support officer Mark Bell stepped down some months ago. He would often stop troublemakers.

“I call the police every month or so to report problems at the village hall or car park,” said Mr Booker. “You see dangerous driving, drug taking, smashing of bottles, loud music and other issues.

“I try to calmly speak to those responsible, which sometimes does work and sometimes doesn’t, but every time I do that, I put myself and my home at risk.

“Then there’s the clearing up afterwards — you get broken glass or empty nitrous oxide canisters.

“I know the police can’t be everywhere and have limited resources but when there’s a pattern of antisocial behaviour it’s not unreasonable to expect action. Mark Bell was very proactive and effective at deterring this sort of thing.”

He said CCTV would now be installed at the commercial estate, which has been in his family for three generations.

“I used to manage industrial estates in areas with high crime and this very quickly reduced the number of incidents,” said Mr Booker.

“Of course there’s no silver bullet but could the parish council consider this? I’d hope we all agree that last week’s incident was a wake-up call and I don’t think this is an unreasonable request.”

Fellow resident Andrew Jarvis said: “As a newcomer to the village, I was horrified to read about Tom’s experience and I’m very uncomfortable with it.

“This evening we went to collect our child from after-school club at 6pm and the area [around the green] was in total darkness — perhaps some street lights aren’t working. There was a group of about 20 young people loitering in the children’s play area and although we couldn’t identify them in the dark, it was very intimidating and they definitely weren’t children.”

Councillor Stuart Lawson responded: “I’m particularly concerned that some of these feral youths were up on the roof.”

Council vice-chairman Malcolm Smith said this wasn’t the first time it had happened and vandals often ripped off tiles, which were expensive to replace.

He said it was unclear who owned the street lights as Oxfordshire County Council, the highways authority, had denied responsibility.

Councillor Smith added: “CCTV has been discussed many times but was rejected for various reasons. At one point we did look into cameras that are triggered by movement.

“The issue of street lighting has also been raised but then some people will complain about light pollution. It’s a sensitive issue and we have to strike a balance.

“Mark Bell was very good but all too frequently the PCSOs are in post for a very short period before they move on to become police constables. Even then, they’re covering four or five villages so we don’t see very much of them.”

Councillor Geoff Botting, who chairs the village hall committee, said: “We should consider setting up a working party as this has been a problem for some time.

“In the past, police have suggested that cameras aren’t that effective because people put their hoods up but they do have a deterrent effect. Extra lighting might get some grief but this is a serious problem and can’t go on so we need some kind of action plan. We have to do something.”

Councillor Belinda Hough-
Robbins said the council should speak to Langtree School and the Oratory School, which are both in the village, as well as Woodcote Youth Club to understand the problem and educate youngsters.

She urged villagers to report all incidents on the police non-emergency number 101, saying this had helped stop a spate of drug offences.

Parish clerk Jenny Welham said: “Drug dealing has been rife in this village for a number of years — there are pushers who sit around waiting for people to turn up.

“It’s common where I walk my dogs, near the lay-by at the ponds, though it has improved since we warned a farmer and they fenced off their land.”

Thames Valley Police are investigating the Halloween incident. Anyone with information should call 101, quoting reference number 43200353312.

• Mr Booker first spotted the youths at about 9.45pm and they had been misbehaving since about 6pm, not 7pm and 3pm respectively, as we reported last week.