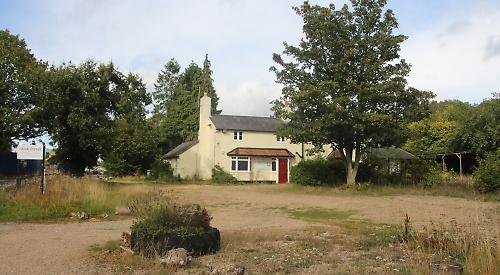 THE White Lion at Crays Pond could re-open almost eight years after it shut.

Businessman Satwinder Sandhu, who bought the former Greene King pub in 2013, is understood to be in talks with new tenants who could run it jointly on a lease of about five years.

Mr Sandhu had been living at the premises with his family, despite not having permission to use it as a private residence, and only left when South Oxfordshire District Council obtained a High Court order.

Last year, a group of villagers successfully campaigned to have the pub relisted as an asset of community value, which makes it harder for Mr Sandhu to sell.

The campaigners, who want to
re-open it as a community venture with additional services such as a coffee shop or a village store, learned Mr Sandhu had been in negotiations over leasing the pub when one of the potential tenants asked them for advice.

The man, who runs a hospitality firm in the area but did want not to be identified, said he and his colleagues were serious about taking on the pub and could have something up and running by the summer if coronavirus restrictions allow.

The would-be tenants were seen inspecting the building and its grounds, which have fallen into disrepair since Mr Sandhu moved out about a month ago, but villagers have heard nothing since.

When Mr Sandhu offered to re-open the White Lion himself in 2016, he said this depended on getting planning permission for either new houses or bed and breakfast accommodation on the site as he claimed a pub alone wouldn’t be viable. He submitted a planning application but the district council refused to consider it as he was already in breach of an enforcement notice so nothing happened.

Chris Hurst, treasurer of the campaign group, who spoke to the prospective tenant, said: “It has gone very quiet following an initial flurry of activity but they were asking how I felt about what they had in mind.

“I said it was fantastic and if they wanted to go ahead and take that lease, they didn’t need our consent or blessing. I believe they’re looking at a lease of five or six years, although that’s just hearsay.

“I don’t know how it would work given the community asset listing but if someone else wants to take it on from Mr Sandhu then we’ve effectively done our job — we’ve saved the White Lion. It’s all we could hope to achieve.”

In the meantime, the residents will continue developing their own plans.

They recently conducted a survey which was completed by 130 villagers and almost all said they wanted the pub to re-open. Most promised to use it several times a week or at least fortnightly.

The respondents suggested a number of alternative uses, including a venue for a possible book or film club.

Mr Hurst said: “We’re still looking at various operating models we could use if we went down that route.

“We could try to buy it back as Mr Sandhu is legally required to give us time to put a bid together before he can put it on the market. It would be wonderful to find someone who would invest a serious amount of cash into it.

“The feedback from our survey has been promising and we’re very pleased with the number of people who responded.”

John Densum, who co-ordinated the survey, said: “The results are very helpful, although I’m yet to drill down into the finer points of what people want.

“There have been all sorts of ideas, from food markets to a day nursery, and the full findings will be published as soon as possible.

“These will be very helpful to anyone else looking to re-open the pub, which I understand is a possibility. We’ve got no problem with that — if a good tenant comes along with a viable long-term strategy, there’s no reason they shouldn’t be allowed to run it.

“Re-opening the White Lion is all the community has ever wanted so we’re behind anything which could make that happen.”

When he was still living there, Mr Sandhu once claimed he had revived the pub by opening a “whisky bar” with limited capacity and opening hours.

But a High Court judge said this “could no more be called a pub than a fig leaf on a naked statue could be called clothing”.

If nothing happens in the coming months, the campaigners could seek a compulsory purchase order in which the district council would force Mr Sandhu to sell at the market rate to preserve the community asset.

Mr Densum said: “That has been discussed and we’re now in talks with an organisation which helps communities secure purchase orders.

“However, it’s a very drastic step and we’d need to do an awful lot more, like setting up a community benefit society, before it could happen.”

Fiona O’Brien, another member of the campaign group, said: “It’s promising that Mr Sandhu is talking with prospective tenants but I hope his plans aren’t based on the condition that he gets permission for housing.

“In the past, he seemed to think he could get the community’s support by offering to re-open the pub as a ‘sweetener’ but it doesn’t work that way because that’s up to the district council.

“I’m a bit sceptical, to say the least, as he was talking with the operator of the Butcher’s Arms at Sonning Common a few years ago but nothing came of it.

“I don’t know if he’ll let anyone take on the lease if he doesn’t get his development.”

Peter Dragonetti, chairman of Goring Heath Parish Council, said: “This is very encouraging news because re-opening the pub was always the campaign’s objective, regardless of how it comes about.

“The White Lion has been empty for a long time and I think Mr Sandhu’s options have been closed off since the renewal of the community asset listing because this carries material planning considerations.

“The district council has always been keen to support the White Lion campaign because we don’t only need new housing but high-quality amenities for our residents.”

Mr Sandhu, who lives nearby, was prosecuted twice for disregarding the enforcement notice to leave and ordered to pay more than £6,000 in fines and legal costs. The High Court later ordered him to pay another £20,000.