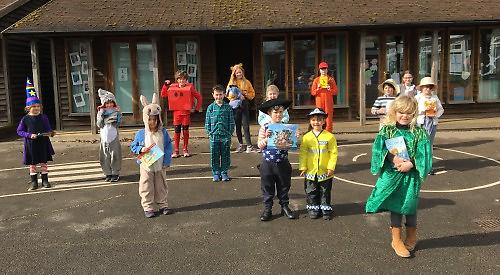 PUPILS at Woodcote Primary School enjoyed a belated World Book Day celebration to mark their return to the classroom.

They dressed as characters from their favourite books, which they were encouraged to bring in so that their friends could read from them.

Costumes included Mr Bump from the Mr Men series, Peter Rabbit, a shark, Winnie the Pooh and characters from the Chronicles of Narnia by C S Lewis.

Staff also joined in the fun, with teacher Andy Langley dressing as Tintin and Helen Pearson wearing a dragon costume.

This year’s World Book Day fell on March 4, four days before the school in Reading Road re-opened, so headteacher Liz Hunt decided to observe it on March 12 instead of holding a virtual event.

She said: “It was a brilliant way to welcome everybody back and do something fun together. There was a wonderful range of costumes which everybody put a lot of effort into. The children were so excited to be with their friends again and there were so many smiles in the corridors and in the playground. They were pleased not to have missed World Book Day because it’s so much fun. It gives them a chance to talk about their favourite characters and learn about books they may not have heard of before.”

Mrs Hunt said the children were settling back into their old routine after several months of learning from home, apart from about 40 youngsters whose parents were key workers.

“They’ve been sharing their experiences of home learning with each other but have been very keen to get back into school,” she said. “Our staff and parents have worked together and worked very hard to ensure things carried on as normal but we’re very much hoping for a permanent return to normal.

“This is where they’re meant to be and it’s vital to see others on a daily basis, chat with friends and play or take part in sport or science experiments together.

“The school has really come back to life and it’s so refreshing to hear laughter coming from all the classrooms once again.”