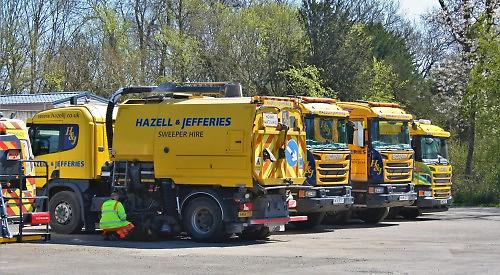 A ROAD repair firm’s bid to register more lorries in its fleet could go to a public inquiry after being opposed by South Oxfordshire District Council.

Richard Hazell, who co-founded Hazell & Jefferies in 1971, wants permission to keep an additional 20 heavy goods vehicles and four trailers at his depot off Pot Kiln Lane, near Woodcote, where he is licensed for 13 HGVs and four trailers.

He has also asked the Traffic Commissioner if he can keep 15 more on a yard he owns off Penny Royal, Goring Heath, which currently isn’t authorised for storage.

He says neither request would mean an increase in reality because he already has that number of vehicles across the sites.

Mr Hazell says the “additional” lorries, most of which are tar tankers up to 20 years old, were previously registered as road construction vehicles but are now more likely to be classed as HGVs so he is regularising an existing operation to avoid future legal problems.

At the moment he is licensed until next February for 45 lorries and five trailers across four locations, including sites in Whitchurch Hill, Goring and Ewelme. His application would vary this to 80 lorries and eight trailers.

Dozens of residents have written to the commissioner saying any extra traffic would be intolerable and, in any case, the existing operation causes problems with noise and vibrations at antisocial hours as well as air pollution. Now the district council, which is the planning authority, says more lorries at Pot Kiln Lane could render his operation unlawful because it was awarded planning permission in 2005 to operate as a repair and maintenance depot only.

Adding more lorries could make it a “civil engineering contractors’ depot”, which requires an application for a change of use that probably wouldn’t be granted because the site has poor access and is in the Chilterns Area of Outstanding Natural Beauty.

However, if the commissioner was to give the go-ahead, planning officers said movements should be restricted to between 7am and 7pm in line with the existing conditions.

They said: “The proposal would make [Pot Kiln Lane] the largest, by some considerable margin, of the company’s operating centres.

“The site is in a relatively isolated rural location where sustainable transport choices are very limited. The surrounding road network largely comprises of narrow rural roads that are unsuitable for any significant increase in transport movements.

“Furthermore, there are a number of residential properties in close proximity to the site along Pot Kiln Lane and Shirvells Hill, whose amenity would be materially affected by a significant increase in vehicles... particularly as a result of increased noise disturbance. A significant increase in activity and vehicle movements at the site would fail to conserve this part of the AONB in terms of increased visual impact and impact on tranquillity.”

Because the company already admits having a bigger fleet, opponents say it should be forced to apply for retrospective planning permission, which would force Hazell & Jefferies to scale it back if this was refused.

Jo Robb, who represents Woodcote and Rotherfield ward on the council, said: “I’m extremely pleased with this robust response and proud that our planning officers have stood up in defence of this community. I hope the traffic commissioner will take this into account.

“As far as planning goes, it could become an enforcement matter in time but I’m not going to speak for the officers on this. In any case, normal procedure is to invite someone to regularise an existing operation and submit a planning application and we’d only then look at enforcement action if this were refused.

“However, if he’s operating outside his licence and the vehicle movements haven’t been granted permission, that clearly needs to be examined very closely.

“Neither of those sites is suitable for large-scale HGV movements because of the AONB and I’d like to have seen a stronger response with respect to Penny Royal but perhaps officers felt it offered closer access to the A4074 and wouldn’t disturb many people.”

Oxfordshire County Council, the highways authority, has raised concerns about the safety of vehicles entering and leaving the site but can’t comment on other aspects.

Kevin Bulmer, who represents Goring division on the county council, said: “It’s a rather strange and unsatisfactory situation. These decisions should be made locally and I don’t understand why we have such little say when we’re responsible for the entire country’s transport plan and environmental issues are a priority everywhere.

“It’s great that the district council has objected but we should be able to take a joined-up approach.”

Mr Hazell, who holds a resurfacing contract with the county council, says his operation employs more than 100 people from the area and local authorities should be doing everything they can to support small businesses after the coronavirus pandemic.

He may challenge the district council’s response to the commissioner because he doesn’t believe planning issues are valid grounds for objection or that his Pot Kiln Lane operation requires retrospective planning permission.

He said: “The council has got the wrong end of the stick when this is purely a licensing matter with no actual increase in real terms.

“The road construction licence doesn’t exist anymore, so I’m switching lorries I’ve had for ages to an operator’s licence and planning shouldn’t have anything to do with that.

“We’ll see what the Traffic Commissioner says but if they put a stop to my tankers, it’ll put people out of work because I’ll just finish with it. It’s very depressing.”