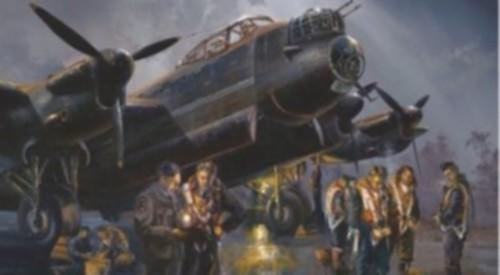 THE British Modern Military History Society is delighted to announce the publication of the first volume of its book Glimpses of War tomorrow (May 8), the anniversary of VE Day.

Born out of the covid-19 lockdown, the book is a compilation of military stories and articles from our members and historians of experiences in wartime, both civilian and military, in any role and any conflict.

What is it like to be a teenager having a warm drink in your home in the early hours of the morning when suddenly the roof falls in during a bombing raid?

This experience is described by Streatley resident Betty Jackson, one of many contributors.

During lockdown, the members and associates of the society were asked to search their family archives and papers for their own and their family members’ experiences of wartime — military or civilian, any war, any role.

An overwhelming response produced more than 220 articles and more than 400,000 words from across the globe, including America, Australia and several European countries, as well as the Goring Gap.

Article subjects ranged from the Boer War to the two world wars and then to the more recent conflicts in the Falkland Islands in 1982 and Afghanistan.

The first volume has 550 pages comprising 80 articles. It contains original first-hand account memories of wartime experiences, both military and civilian, most previously unpublished, including a urse torpedoed in 1918; a Victoria Cross won on the Western Front in the Great War; a 19-year-old Battle of Britain pilot killed on his first sortie; prisoners of war experiences in Germany and under the Japanese; two brothers fighting in Normandy after D Day; a erving in Northern Ireland during the Troubles; iving through the Blitz; a bomb disposal expert in the Second World War; a iving in occupied Europe and resistance activities, fighting with the Paras in the Falklands in 1982.

All proceeds from this volume will go to the charity Blind Veterans UK (formerly St Dunstan’s), which has given full endorsement to the book.

The society has always donated to military charities from its live and Zoom talks and sees Glimpses of War as an ideal mechanism to keep raising funds.

Blind Veterans UK was selected because of its invaluable work supporting military veterans across all the services, many throughout their lifetime. Today, it supports visually impaired members ranging in age from 26 to 106.

The society was formed in early 2019 by brothers Andy and Jerry Cockeram and Nigel and Dr Linda Parker.

It aims to provide monthly talks on military topics on the last 200 years in a friendly, informal setting.

Talks are currently via Zoom but will return to Woodcote village hall when the coronavirus restrictions allow.

Future volumes are planned and contributions are still being accepted.

More details of the publication and how to contribute to future volumes can be found at www.bmmhs.
org/glimpses-of-war