Oh boy, I did high jump 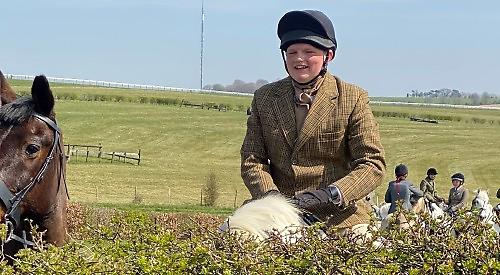 A TEENAGE boy with autism has achieved his dream of jumping over a high fence on horseback.

James Preston, from Checkendon, successfully cleared a 1.67m hedge while taking part in a drag hunt at Kingsclere, near Newbury.

The 15-year-old was one of about 50 riders who tackled the course, which is owned by racehorse trainer Andrew Balding.

He beat his personal record set when he and his 11-year-old Irish sports horse Patrick jumped a 1m fence at the Chiltern Cross Country course in Woodcote.

The pair are being taught by experienced rider Amanda Stewart, who lives in Woodcote and befriended James as they both stable their horses at Frieze Farm in Sonning Common.

When they first met in October, James was struggling with Patrick because the horse had a pain in his tooth and associated this with efforts to make him jump.

Mrs Stewart, a former master of the Garth and South Berks Hunt, was able to help the pair bond and they would ride around the surrounding countryside during the coronavirus lockdown.

James told her about his ambition, which he’d had since he took up riding when he was seven, so she helped him improve his technique and invited him to attend the Kingsclere meet.

First they visited the Woodcote course to ensure he was ready and James cleared the tallest fence after his first attempt, which he made on the spur of the moment.

He was the first visitor to achieve this since the centre opened on an
11-hectare field off Oxford Road in March.

James said: “I walked past that jump a few times and to me it looked the same as the others — nothing too crazy. I only realised how big it was afterwards and felt great as I realised how far I’d come.”

He was accompanied to Kingsclere by his parents, Andy and Tina, who watched him and Patrick clear its highest hedge. James said: “That was thrilling because we were coming down towards the jump from the top of the hill and it just seemed to get bigger and bigger as we got nearer.

“Again, I didn’t realise how tall it was but we had a look afterwards and it was bigger than both our horses.”

Mr Preston said: “He was so excited to go there and couldn’t wait as he’d only attended as a spectator before.

“We could see him approaching the jump and just thought, ‘No, no, no’ but we were very proud of how well he did and relieved that he didn’t come off.”

James, who lives with his parents and 19-year-old brother Drew and niece Summer, seven, suffered a bout of encephalitis, a type of brain inflammation, when he was about 15 months old.

He was later diagnosed with autism and Tourette’s syndrome, a neurological condition that causes involuntary movements, which may have resulted from his earlier illness.

He attended Trinity Primary School and Gillotts School in Henley but struggled at the secondary so moved to Berkshire College of Agriculture, where he is now studying three GCSEs as well as animal management with a view to working in the field. He hopes to one day become a hunt master with responsibility for planning routes, leading rides and looking after the horses and hounds.

James, who also plays football for AFC Henley’s under-16 Hurricanes squad, started learning to ride with RKD Ponies in Checkendon and got his first horse, a Connemara named Connie, when he was 11.

He then joined the Woodland Hunt Pony Club in Harpsden. In 2018 he won the 60cm jump class of the Checkendon Summer Series at the village equestrian centre.

James got Patrick about two years ago and first had to feed him up to increase his weight before attempting to ride him. This proved difficult for some time and he would probably have given up had Mrs Stewart not stepped in.

He said: “I was having a lot of trouble but she was able to move things forward and tell me what to do and how to do it properly. I wouldn’t still have Patrick without her so I’m really grateful.”

Mr Preston said: “James got into jumping soon after he took up riding and because of his autism, he doesn’t have that ‘fear factor’. I think we were more frightened by it than he was.

“It’s scary to watch at times but we’re so pleased that he has found his passion because he went through some very hard years at school with people not understanding his difficulties. Amanda has taken him under her wing and they’ve done absolutely brilliantly together — she has achieved all the things he wants to do and will encourage him to keep trying until he gets it right.

“That gave him the courage to try the big jumps because he went off and did them without any pushing from her. He’s much more confident after finding something he’s talented at and now he gives advice to younger riders.”

Mr Preston also thanked Roxane Holt, the owner of Frieze Farm, for helping James with additional riding lessons and showing him how to care for his horse

Mrs Stewart, of Beech Lane, said: “I felt on top of the world to see him doing so well. When he was lining that horse up for the Kingsclere jump, my heart was in my mouth as it gradually dawned on me that the jump was far bigger than it looked.

“It was absolutely huge and from the other side, you could only see James’s head sticking up over the top of it afterwards — you couldn’t even see the horse. I had no idea he would try anything that big but he did it beautifully.

“They’ve got very little fear at that age and this has given him so much confidence that he’s flying in every sense of the word.

“Despite the age difference, we’ve got a lot in common and he doesn’t mind me being bossy though I’ll never put him out of his depth as I want him to progress.

“I’m so proud and it’s great to see a boy of his age on a horse — it’s something that should be encouraged.”

Diana Rhodes, owner of Chiltern Cross Country, said: “James didn’t have much experience so we were shocked when we saw him heading for this massive jump and the look on his face when he managed it was sheer delight.

“As for the Kingsclere hedge, I’ve been riding for years and I wouldn’t try anything like that.

“I’ve run PR campaigns to get more people into riding and want to show it’s for everyone.

“It has such a therapeutic effect on people who don’t communicate as well with others but can do so with horses and other animals.”