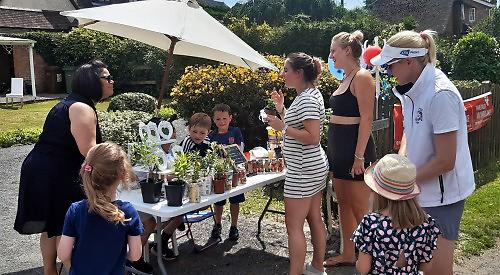 A BOY from Woodcote raised money for the Thames Valley Air Ambulance by setting up a shop in his front garden.

Theo Longland, of Goring Road, was selling jars of sweets, snap bands, temporary tattoos, garden plants and fresh produce from a stall on his driveway in Goring Road.

The six-year-old, who attends the Oratory Preparatory School in Goring Heath, ran it with a group of classmates from year 2 and his brother Harrison, three.

He came up with the idea a few weeks ago and his mother Emma helped him to get it off the ground.

The produce, which included potatoes, courgettes, carrots and gooseberries, was grown at the village allotments off Reading Road by Theo’s next-door neighbour Linda Booth.

The youngster visited the site a few days before the sale, which took place on Monday afternoon, to help her to harvest the goods which shoppers could put in a basket. His mum contributed a series of framed four-leaved clovers which she harvested from woodland around RAF Benson, where Theo’s dad Sqd Ldr John Longland works.

Theo wrote invitations and sent them to friends and on the day he operated a cash box and had to work out how much change to give to shoppers. Proceeds are yet to be counted but dozens of villagers were stopping to make purchases as they passed the house.

Claire Fahey, of West Chiltern, who stopped with her children Sophie, five, and Freddie, three, said: “It’s such a lovely idea for a holiday activity and I really hope it’s a success.”

Mrs Longland, who works at the prep school as head of English and drama, said Theo might hold another sale later in the year.

She said: “Theo just said to me, ‘Mum, can we open a shop?’ and with a long holiday looming ahead of us it seemed like a really smart way of passing our time.

“It was a great chance for him to work on different skills, from working with people to maths, and we were happy to back the air ambulance because it helps so many people.

“It’s been interesting staging this on one of the hottest days of the year but the kids have loved it and enjoyed letting off some energy.

“I think it’s made Theo more confident and his friends were happy to support him because everyone loves getting a personal invitation.”