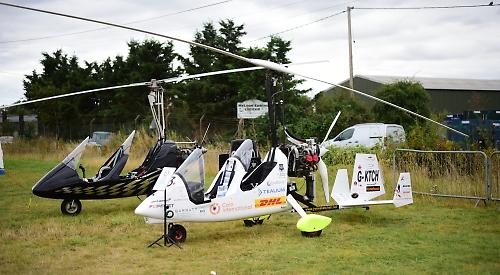 A COUPLE who have run an airfield near Woodcote for more than 30 years held a farewell event to thank their supporters.

They were told to leave the site last year by farmer Guy Hildred, who owns the 75-hectare plot.

The lease expires on September 24 and the Pearsons are hoping to find a new headquarters in South Oxfordshire.

On Sunday, dozens of people came to watch aircrafts taking off. Mr Pearson, 64, said it never felt like coming to work and more like a “jobby”.

He said: “It’s my job, but it’s my hobby. To smile every day you go to work and to want to go to work – not everybody gets to do that. It’s just unfortunate how it’s ended.

“After 60 years of friendship with the landowner, it came as quite a shock. We have to respect his decision that he no longer wants an airfield.

“We were absolutely gutted because we could have made this 10 times what it is. It is our livelihood and it is our life.

“Things are meant to be for a reason and we will move onwards an upwards. We are very much cup half full people. We have spent our lives being positive and we will carry on like that.”

The airfield was open from 9am and supporters came from across the country to see the collection of gyrocopters, gliders and light aircraft.

They included an autogyro, which was used by James Ketchell in 2019 to circumnavigate the world in 175 days, which is a Guinness World Record.

Many visitors were given rides in exchange for a contribution to the Thames Valley Air Ambulance.

There were about 50 different aircraft on the day, although there could have been more if the weather had been better.

The Pearsons, who grew up in the area and were married at Checkendon in 1983, started the business after Mr Pearson tried his hand at flying a microlight aircraft in the late Eighties.

He said: “The reason this air strip is here is because I used to live at the end of the runway. I would go to Popham Airfield every week for a lesson. My old instructor lived in Reading and said it would be great to have an airstrip nearer to us.

“I mentioned it to the landowner’s father, who said lets go and see what we’ve got. It enabled me to finish off doing my licence. Half of my life has been spent on this airfield. I wanted to learn to fly more locally and at the time there was nothing around. When this goes it will go back to having nothing again.

“We’re both born and bred here and I’ve moved two miles in 64 years. It would be lovely to continue our charity work especially.”

During their time at the airfield, the couple have helped to raise more than £1.5 million for over 200 charities by hosting skydiving and wing walking challenges.

Chiltern Park Aerodrome is the only centre in southern England to offer all nine air sports recognised by Sport England.

The business has up to 8,000 visitors a year. More than 300 residents supported a campaign to prevent it from relocating and it was recognised by South Oxfordshire District Council as an asset of community value.

It is only the second airfield in Britain to achieve this honour, but it does not stop them from being evicted.

If Mr Hildred were to put the land up for sale, he would have to wait six months for the community to put in a bid but wouldn’t be obliged to accept the offer.

The couple were pleased to see so many people turn out on Sunday.

“We’ve had lots of local people that have neve been up before and that’s what it’s all about.

“The local support is phenomenal, especially for us to achieve an asset of community value. That gives us heart that we are doing the right thing.”

Mrs Pearson added: “People have come from all over the country. I just think all of the charity work we’ve been able to help with stands out for me.

“I’ve loved all of the fly-ins and meeting so many people we would never meet. I met Jude Law two years ago – I made him a cup of tea and I didn’t even know who he was at the time.”

In 2017, TV presenter Phillip Schofield did a wing walk for This Morning and his mother Pat did one not long after.

Mr Pearson explained: “His mum found out and said ‘How dare you do that before me?’ We took her out and did the loop the loop. That was her 80th birthday.”

Mr Hildred says the airfield has become too big and the noise of aircraft taking off and landing disturbs the neighbours.

The couple have been offered a new site in South Oxfordshire, which they believe is suitable, but haven’t agreed anything yet as they would be required to apply for planning permission for a change of use.

2108791 – One of the light aircraft owned by Chiltern Aerodrome