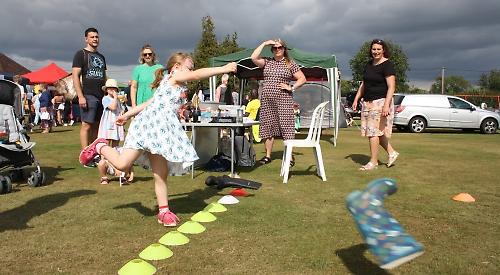 The village of Woodcote was reunited on Saturday with the return of the village fete.

There was a celebratory atmosphere, with many villagers saying they had not seen each other since before the pandemic, and the sun making an unexpected appearance for much of the afternoon.

Stallholders included Maz Elsome, who was selling her ‘Made my M.E’ handmade decorations. She started making things during lockdown and now it has become a small business. She joked that she had made her three children, and now she was getting on with making something else. She added: “It was weird not having the fete last year, and the village was like a ghost town. It’s great to be back with everyone."

Woodcote pre-school, were running a tombola and raffle to raise funds for the charity pre-school which runs out of the village hall. They also had a competition to throw a ball through a wooden pig’s mouth, and to guess the name of the pig.

There were stalls for the raft club, running a wack a mole game, Woodcote conservation group, and the Nettlebed group of the royal British legion were in attendance selling merchandise and hoping to drum up support for a new branch of the group in Woodcote.

Friends of Stoke Road church were in attendance and had collected a wide range of items for their annual raffle to raise funds for the church. Friends of St Leonard’s Church, which rang its bells at midday to open the fete, were fundraising, saying they had struggled financially in lockdown with no services, and some older people still not feeling comfortable to return.

Woodcote rally were there selling some merchandise, but said their main aim was just to remind people about the event after two years absence.

Friends of Woodcote primary school ran a welly wanging competition. Woodcote volunteers attended reminding people of their work providing transport to those in need, and appealing for new driver volunteers.

Jennie Kettell, from Reading, had a stall trying to raise money to buy a coffee van which she will use to provide work and training for school leavers with learning difficulties. She has raised £5000 of the £10,000 needed so far.

There were ‘silly races’ with no rules, including hoola hoop and sack races. There were categories for children, for mummies, aunties and grannies and for daddies, uncles and grandads.

There was also a fun dog show, with categories such as tail wagging, presided over by entertainer Jester Giggles.

Inside, judging took place for a variety of prizes, for art, vegetable growing, cake making and flower arranging.

Joanne Lillywhite has been one of the team organising the fete since 2015: “There has been a buzz around the village that it’s coming back this year. The other big summer event the Woodcote rally was cancelled this year, so this is all we have. We may not be the prettiest village, but when everyone comes together like this its amazing.”

Marta Ciruelos, 30, moved to Woodcote to work as a designer just before lockdown began: “It’s been great, this is the first time I’ve really seen people in the village. For the last two years it’s felt like there’s no one really here, but this is amazing.”

Her parents, visiting from Spain remarked that the fete felt similar to ones held back home.