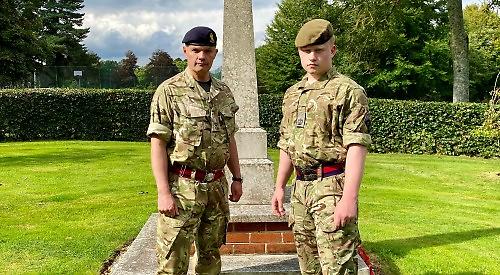 A STUDENT at the Oratory School in Woodcote has been selected as a cadet to the Lord-Lieutenant of Oxfordshire.

Oskar Jordan-Barber, 17, has been involved in the Combined Cadet Force since he started at the Catholic independent school five years ago and is now its senior under officer.

He will be invested at a ceremony at Pembroke College at the University of Oxford on October 28.

The Combined Cadet Force is a youth organisation with army, Royal Navy and Royal Air Force sections which operates in schools and aims to instill leadership skills in young people.

The Lord-Lieutenant has one cadet from each of the four cadet services, the Combined Cadet Force, Air Cadets, Sea Cadets and Army Cadet Force. The cadets accompany the Lord-Lieutenant to community events and ceremonies and represent the cadet forces through public speaking.

Oskar, whose father is in the army, said the school put him forward for the position after being impressed with his conduct when leading his peers as senior under officer.

Candidates from CCFs from across the county were interviewed by senior officers from the RAF and army earlier this year. The Lord-Lieutenant Tim Stevenson then considered the applications and made the final decision.

Oskar said he was asked about his time in his CCF, his leadership skills and how he would support the Lord-Lieutenant.

He said: “I didn’t think I would get it because when I went into it I didn’t really know what it involved, I was a little bit blind.” Oskar, who boards at the Oratory, said his father had been very impressed with his achievement. His family are currently living in Italy.

He added: “It means a lot to the school because I’m the first pupil from here who has been selected for it. When I first came to visit the school I thought it had an amazing family feel. For a forces child having that family feel is important and it’s something the school prides itself on.”

Major Scott Bosher, who runs the CCF at the Oratory, said: “This is a great honour for both Senior Under Officer Jordan-Barber and the Contingent as well as the Oratory School. This post is recognised throughout the cadet organisation.”

• Mr Stevenson retired as Lord-Lieutenant last week and has been succeeded by Marjorie Glasgow, from Charlbury.