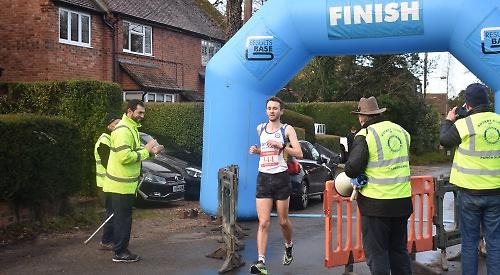 A VETERAN runner and his granddaughter won their categories at this year’s Woodcote 10km.

David Dibben and Ruby Cooper, who both live in Caversham, were among almost 400 people taking part in the event, which was cancelled last year due to the coronavirus pandemic.

The runners started outside Langtree School in Reading Road and then went along Goring Road, down the hill in Battle Road to the outskirts of the village, along Icknield Road, which is mostly a steep climb, and finally along South Stoke Road to the finish.

She was also nearly seven minutes quicker than her time two years ago.

Ruby, who attends Highdown School in Emmer Green and is a member of Henley Swimming Club and plays for AFC Reading Tampa Belles, said: “I didn’t expect to win anything.

“I expected my granddad to as he is an amazing runner and always beats me doing park runs. I had only done a few 10km runs before and usually run shorter distances

“I didn’t do any training really as I had only decided to take part the day before but I really enjoyed it.

“I love to run when I have time and especially with a friend so I will probably do it again next year when I would love to beat my time.”

Mr Dibben, 73, was the first man home in the over-70s category with a time of 49 minutes and one second, three minutes ahead of second-placed David Leake. His wife Jill, also 73, finished in a time of one hour, 18 minutes and nine seconds.

Mr Dibben is a member of Reading Roadrunners and was competing for the fourth time. “It wasn’t too important for me,” he said. “I think it was probably the slowest time I’ve ever done it in.

“I know quite a few people from my club who take part as it’s a badge of honour to say we’ve got up that hill.

“It’s the hardest 10km race out of the way in the first week of the year so hopefully, as the year goes on, we’ll be running on some flatter courses. Some of us go down there a couple of weeks in advance and run it twice but it doesn’t make it any easier.

Mr Dibben called Ruby’s effort “brilliant”, adding: “Experienced local runners know that Woodcote is one of the toughest 10kms on the calendar and many are pleased to finish inside an hour.

“I also thought she showed a lot of courage to run in a Reading FC away shirt after the debacle at Kidderminster the previous day.”

Fellow members of Reading Roadrunners, who had 27 entrants, won three other age categories.

Sarah Dooley, from Caversham, was the first woman home among the over-40s and the fourth female overall with a time of 41 minutes and 37 seconds.

Ben Paviour, of Reades Lane, Sonning Common, won the men’s over-40s category in a time of 36 minutes and 31 seconds.

Brain Kirsopp, who is the postman for Woodcote, won the male over-60s category in a time of 42 minutes and one second.

The winner of the main race was 24-year-old Joe Godwood, from Witney, who came home in 32 minutes and 42 seconds, more than two minutes faster than the winning time in 2020.

Mr Godwood, who was representing Witney Road Runners, said: “I was really pleased with my time. It was a tough course but I got a personal best on it so I can’t complain. The last kilometre or two was quite difficult and I tried to keep pushing. It was hard to run downhill then uphill.”

The runner-up was Jack Shayler, a professional triathlete, who finished in 33 minutes and 18 seconds. He was running for Abingdon Athletics Club. Matthew Locke, 23, also a member of Witney Road Runners, came third, one minute and 20 seconds behind Mr Shayler.

He said: “I was just waiting for the hill to finish and it just didn’t.”

Christine Halls was the fastest female runner with a time of 41 minutes and 24 seconds, just two seconds ahead of Anna Kelly in second and five ahead of third-place Abigail Saker.

The other category winners were Steve Barnes (male over-50s) and Ruby Hosier (under-14s).

All category winners were presented with a trophy in front of the village hall by Sarah Hopley, president-elect of the Rotary Club of Pangbourne, which organises the event.

About £5,600 was raised and the majority of this will go to Parkinson’s UK. The rest will be divided between other good causes in the community.

Jerry Wilson, who is treasurer of the Rotary club and event organiser, said: “It went brilliantly. We had 396 people enter, which is on a par with most other years.

“People have been desperate to get out and we had great weather, which is perfect for a run.

“It’s a challenging course as it’s about a third downhill and a third uphill to the finish with a bit of flat in the middle but it works well.

“We’re supported by lots of volunteers and about 80 per cent of everything we raise goes to charity.”