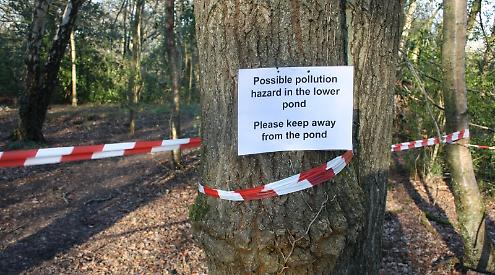 HUNDREDS of toads have been found dead in a Woodcote pond.

The Environment Agency and Thames Water are investigating following the mass death of wildlife including toads, newts and fish in Greenmore Ponds.

Woodcote Parish Council has sealed off the ponds to walkers while the investigations are taking place to prevent potential harm to walkers or dogs.

Walkers first saw toads dead in and around the lower pond at Greenmore on Wednesday last week. They also reported seeing fish gasping near the surface of the water.

On Thursday night the village’s toad patrol group, which helps the spawning toads across the road to reach the pond, realised the extent of the problem and the pond was sealed off. The group has now suspended its work.

Karen Wolley, who founded the Woodcote Conservation Group, which looks after the ponds, said: “At the moment we don’t know what has happened. The unexplained deaths started on Wednesday. Hundreds of amphibians have been seen dead, toads and newts and fish. It’s affecting them all.

“The Environment Agency is looking at it as a potential pollution incident.

“At 9pm on Thursday, while doing toad patrol, we realised the extent of the deaths and contacted Malcolm Smith, chairman of the parish council, who met us up there straight away to seal it off.

“There are viruses that kill off amphibians and you can have mass deaths because of that but this is across species.

“It would be unusual for there to be a mass death across species unless it’s something to do with possible contamination but that could be naturally occurring as well. We’ve got to keep an open mind.

“If it’s natural that’s just something we have to deal with. But it’s important to rule out anything more sinister. It’s positive that the Environment Agency has listened to us and come out and investigated and it’s exemplary that the chairman of the council came out at night to make the area safe for residents.”

A survey in 2000 found that the ponds had a very high conservation value and were home to nine nationally scarce species including beetles, frogs, toads and smooth, palmate and great crested newts.

Toads use the lower pond as they need deep water to breed. No deaths have yet been seen in the upper pond, which is mainly used by frogs and is fed by a separate water source.

The lower pond receives water from springs at the western end of the pond, direct rainfall and run-off from the surrounding land.

Liam Wolley, chairman of the conservation group said: “It’s a historically important pond which probably dates back to Roman times. It was first mentioned in a document in 1109. It’s important for its biodiversity and it’s valued by local people — it is often studied by Oxford University.

“It’s a nationally rare pond because it’s very high up in the Chilterns and there’s at least one rare diving beetle.

“It’s a very lovely area for people to come with their kids and particularly in lockdown it became more and more popular.”

Councillor Smith said: “It was important that we took action to protect residents of the village, who we have a responsibility to keep safe. The tests need to be carried out to rule out any potential risk.”

An Enviroment Agency spokesman said: “Our team has carried out tests but so far these have shown no obvious signs of pollution.

“We are aware a number of toads have died and we are trying to ascertain whether there are any signs of pollution or whether it was naturally occuring.

“We don’t know at the moment but investigations are still ongoing.”