School cadets show off their skills at formal inspection 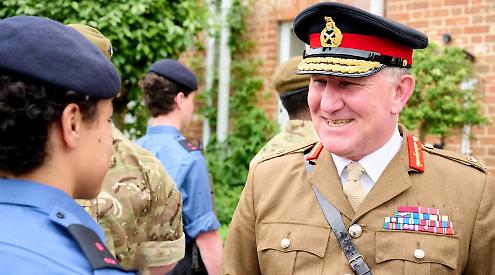 MEMBERS of the Combined Cadet Force at the Oratory School in Woodcote have undergone their first inspection in four years due to the coronavirus pandemic.

The review was carried out by Lieutenant General Richard J Cripwell, Lieutenant Governor of Guernsey.

The cadets welcomed him with a guard of honour assisted by the Corps of Drums.

They then carried out a series of activities to show off their skills and knowledge, including a virtual reality flight, Royal Navy field gun, paintball close quarter battle and a first aid incident scenario display.

In a short address, Lt Gen Cripwell said he was impressed with what he had seen and the stunning facilities at the independent school.

Maj Scott Bosher, contingent commander, said: “Our cadets and staff had been working hard in preparation for the general’s visit and did themselves and the school proud.”