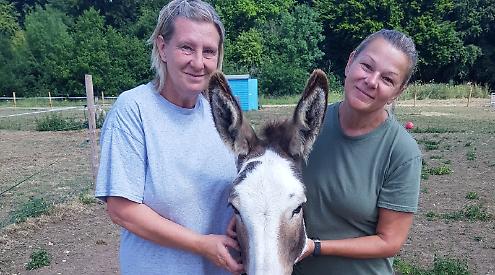 A FARM that runs animal therapy sessions for children is celebrating its first anniversary.

Smelly Wellies in Woodcote was founded by Lorraine Brown, 54, and Vikki Edwards, 51, after they bonded over a love of animals.

Children who visit find out how the animals are groomed, cleaned and fed and are able to stroke them.

Mrs Brown said: “It started with piglets, Vikki needed somewhere to put hers and my daughter saw her advert. We had space, so she brought the four piglets over and we became good friends quite quickly.

“We realised that we both had a love of animals and before we knew it we had Poppy and Monty, the donkeys, and we began thinking what we could do with them.

“My background is working with children with special needs, with 15 years working in schools, so we wanted to use those skills. From there we thought of animal-assisted therapy and opening up to the public to have group and family visits.”

Mrs Edwards trained as an animal behaviourist and says some of the children who come to them are not in school.

She said: “They come to us for animal assisted therapy because they are not accessing school due to an additional need, anxiety, anything like that. Schools get in contact with us and ask ‘can you have this person for a slot’.

“Most of the children are autistic or have ADHD. We do have a SEND group session that does have wheelchair users and more physical disabilities.

“We also do a lot of work with Hands on Play Therapy which brings a lot of children to us. In the last year our name seems to be getting out there to local authorities and schools.”

All the animals at the 14-acre site have been rescued and rehomed and Mrs Brown says that they give the children confidence.

She said: “The animals are amazing with the kids. We have had children that have come to us that wouldn't even stroke an animal when they first came in or wouldn't speak and be really shy and we have seen them flourish and blossom.

“We had one boy who came that was mute really but he has started to talk to us a little bit because he feels relaxed and confident here. We have had some great success stories.”

Adults, too, can meet the animals and toddler and family visits can be arranged.

Mrs Edwards says they also take the animals into care homes specialising in people living with dementia, which has been transformative.

She said: “We went to a dementia home and took the guinea pigs and there was one lady who hadn’t spoken for ages. She started to stroke the guinea pig and by the time we left she was telling us stories of when her aunt had guinea pigs when she was young. The staff couldn’t believe she had spoken.”

The sessions are by appointment only, which allows the animals scheduled breaks and time for feeding. The farm is also available for birthday celebrations and in its 11 months of operation has hosted parties for a one-year-old and an 80-year-old.

Mrs Brown said they want to continue doing animal therapy because they see the difference it makes in people.

She said: “We just want to be accessible to anybody and everybody. I think we have got amazing animals here and we are so lucky with the support we have got that actually at the moment we don't want to change much.”

Mrs Edwards added: “It has been non-stop since we started, it has been a lot of hard work and for the moment we want to keep it how it is and enjoy the successes we have had so far.”