Precision singing and smooth music touched all our hearts 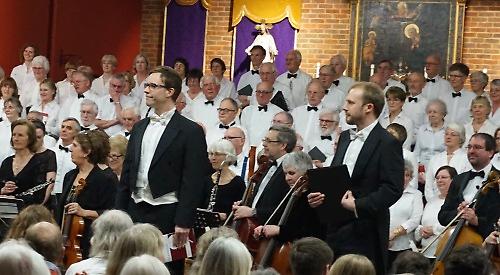 AN evening spent listening to the music of Sir Edward Elgar is never wasted.

When the performance is being given live by a well-trained, disciplined choir, a large, capable instrumental ensemble and four excellent soloists, all under the experienced baton of Christopher Walker, then a truly memorable event is guaranteed.

And so it was that The Benson Choral Society regaled a packed audience with a stunning performance of The Kingdom, partnered ably and most appropriately by The Elgar Orchestra.

This great English oratorio, first performed in 1906, depicts the Christian community through events in the lives of The Apostles, at Pentecost and in the days thereafter.

The four soloists represent The Blessed Virgin (sung by Lorena Paz Nieto, Soprano), Mary Magdalene (Susan Legg, Mezzo Soprano), Saint John (Nathan Vale, Tenor) and Saint Peter (Johnny Herford, Bass). The work is split into five parts, each of which is played without a break. They are preceded by a prelude which introduces all the melodies that would come to haunt the listener long after the performance had finished.

It was apparent from Christopher Walker’s own programme notes that he has a deep understanding and thus complete mastery of this complex work.

The music flowed seamlessly and naturally from one episode to the next as if it was emanating from a single gigantic instrument. Perhaps a few more violins would have been nice to counter-balance some of the steamier moments when the brass and woodwind held sway. Otherwise the inter-play and co-operation between all the forces involved was as near perfect as one could wish.

In this work the choir has plenty to do, representing the people seeking enlightenment and salvation. Its contribution was passionate but finely controlled to give a most professional offering. The singers’ enthusiasm showed in their faces. They clearly shared their conductor’s high opinion of this oratorio and were enjoying performing it.

There were many exceptional moments of significance and beauty throughout the evening. The four soloists sang their extensive parts with a mixture of precision and sincerity that was a joy to behold.

But perhaps the most sublime moment came from Susan Legg’s solo at the beginning of Part Four, The Sign of Healing. Her words, delivered simply, with clarity and deceptive ease, touched the heart.

Elgar’s The Kingdom is not as popular nor performed as frequently as his The Dream of Gerontius, though some cognoscenti claim that the former is the greater work. Perhaps people haven’t heard a really definitive performance. They should have come to hear Benson at The Oratory.