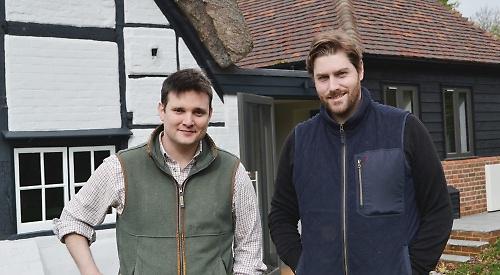 A PUB in Binfield Heath that has been closed for three years will re-open on April 1 after being renovated and extended.

The pub is owned by the Phillimore Estate which bought it from Brakspear for more than £400,000 in 2014. This followed a quick turnover of landlords and the pub’s closure in November 2013.

The estate has completed an
18-month restoration of the Grade II listed building and built a two-storey extension, which will house a 70-cover restaurant.

The car park has been moved to the rear and an infill three-
bedroom house built. A bar for “locals” has been created in the old part of the pub, with pews, benches and standing room.

Mr Holliday, who used to be head chef at the Pot Kiln pub and restaurant in Frilsham, near Newbury, said: “We wanted to be involved with a regeneration of a pub.

“We wanted somewhere that screamed ‘traditional English pub’ but the site also had to be able to accommodate a kitchen and trading spaces that could be run as a food-led operation.

“The Phillimores have created a wonderful trading space at the back of the pub so the business case for the project was much stronger.

“It ticked a lot of boxes with a rural location close to Henley and easy access from Reading station if we really put it on the map.

“But we don’t want to just be a restaurant, the pub aspect is very important to us. We have a great big outside space and will be doing bar food.”

Mr Holliday is the co-founder of Natural Blender, a subscription-based smoothie business, and has also launched a range of game-based products for Waitrose.

He was working as general manager at the Harwood Arms in Fulham in 2008 when he first met Mr Sergeant who then succeeded him and won awards for his wine lists.

The Bottle and Glass Inn will serve beer from Loddon Brewery in Dunsden, which is also on the estate. The landlords plan to source produce directly from local farmers where possible.

A range of bar snacks will include Lancashire bomb with onion pastry, hand-raised pork pies and the Bottle and Glass scotch egg.

The tenants plan to open the pub to villagers only at the end of this month.

A spokesman for the estate said: “When the last remaining pub in Binfield Heath came on the market, the Phillimore family were keen to secure its future not only as a listed building but as a functional pub.

“The estate has liaised with Binfield Heath Parish Council to ensure that the village keeps a pub as a vital and vibrant part of the community.

“The estate recognised that village pubs can no longer survive without extensive restaurant facilities and undertook a sympathetic renovation of the listed pub and a major extension project to create a traditional pub that is equipped to deal with modern requirements.

“The Phillimore family are delighted to have David and Alex on board and are looking forward to the Bottle and Glass becoming the heart of the community once again.”

It was then taken over by Anthony Eden, a former Goring parish councillor, but he left in November 2013.

The parish council registered the pub as an asset of community value before it was bought by the Phillimore Estate.