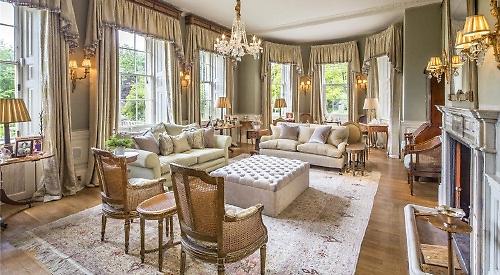 THIS Georgian mansion in Binfield Heath is reported to have been bought by Jerry Hall and Rupert Murdoch.

The Texan model and her media proprietor husband are said to have paid at least £11.25million for Holmwood, an 18th-century house and estate off Shiplake Row.

The 11-bedroom property, which is in the Chilterns Area of Outstanding Natural Beauty, was built in the early 1700s and has three cottages in the grounds.

It was previously owned by barrister and Liberal Democrat life peer Lord Marks QC, who grew up in Maidensgrove and Checkendon, and his wife Medina.

The couple oversaw an extensive refurbishment of the estate after buying it in 2008.

The Grade II listed main house includes period features such as a marble fireplace and large sash windows in the drawing room and has several later extensions.

There is a dining room with space for 24 people and each bedroom is en-suite.

The property also has a ballet studio, an “infinity” pool and an all-weather tennis court with a sauna cabin and built-in barbecues.

The grounds, which are designed in the style of British horticulturist Gertrude Jekyll, include laurel walks, terraces planted with roses, lavender and a mix of Mediterranean plants and a “sunken” garden with a fountain.

There is also a parcel of woodland with a stream running through it and a field where the annual Binfield Heath Flower Show is held.

The house stands on land previously owned by the Stonor family, of Stonor Park, who were forced to sell it in 1650 to pay heavy fines imposed by Henry VIII because of their refusal to recant their Catholic faith.

Its early history is unclear but one owner was Vice-Admiral Lord Mark Robert Kerr, a naval officer.

It passed into the Antrim family through his marriage before being brought back by the Stonors in the early 19th century, when the repression of Catholics which had started under the Reformation began to ease.

It is linked to several famous names including Emily Sellwood, who spent the night there before her wedding in 1850 to future poet laureate Alfred, Lord Tennyson, who was a friend of her cousin, the Rev Robert Rawnsley, vicar of Shiplake.

Other former owners include the poet Admiral Charles Swinburne, the Makower fabrics dynasty and more recently Brian and Wendy Talfourd-Cook, who left the village in 2007.

Lord Marks upset neighbours in 2016 when his plans for a six-bedroom home on the site of seven existing outbuildings were approved on appeal.

Lord Marks was called to the bar in 1975 and became a Queen’s Counsel in 1995. His area of expertise is civil actions involving allegations of commercial fraud and he regularly represents major insurers in fire claim cases.

He was created Baron Marks of Henley-on-Thames in 2011 and has spoken regularly in debates in the House of Lords, focusing chiefly on constitutional reform and justice issues.

Lord Marks and his wife, who have seven children, are supporters of Garsington Opera, which is based at the Wormsley estate, near Turville. Lady Marks is a member of the board of directors.

Hall, 63, is the former wife of Rolling Stones singer Sir Mick Jagger, whom she divorced in 1999.

They remained on good terms and she only left their home in Richmond after marrying Mr Murdoch in 2016.

Mr Murdoch, 88, an Australia-born American citizen, is the founder of News Corp, an international conglomerate which owns The Sun, The Times and Sunday Times as well as publisher HarperCollins.

The family also has a stake in the American broadcaster Fox Corporation.