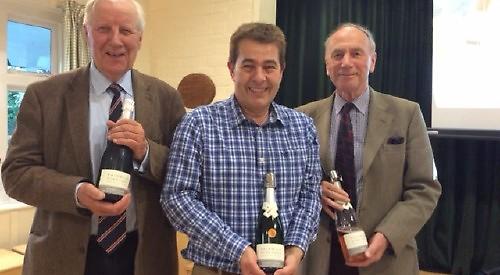 MEMBERS and friends of the Bix branch of the Royal British Legion filled the village hall for a talk on “Establishing a vineyard from scratch” by Jan Mirkowski, the owner of the Fair Mile Vineyard in Henley.

His father fought in the Second World War but was unable to safely return to Poland after the conflict so came to England, where Jan was brought up.

Jan explained that he had an interest in wine from childhood and, after a successful career in telecommunications, decided to sell up and establish a vineyard.

Five years ago he and his wife bought a house on Fair Mile with a south-facing slope suitable for vines.

He said the chalk soil there is the same as the Champagne region in France and, thanks to global warming, the temperatures are equivalent to that region in the Seventies.

The 12,000 vines were planted in just 12 hours with pinpoint accuracy using satcoms direct to the tractor.

Jan said the first vintage was on sale this year having undergone secondary fermentation in bottles for more than two years and had already won awards.

The proceeds of the evening will go to the Legion’s Poppy Appeal.